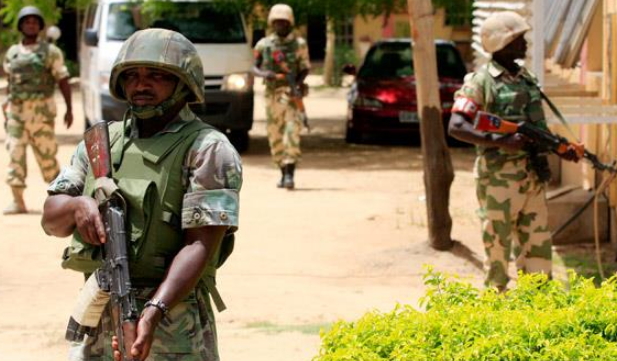 NAN learnt that the troops engaged the insurgents in gun battle at Mainok, about 73 kilometres drive from Maiduguri.

Mainok is one of the liberated communities rehabilitated by the government.

The town recorded high number of returnees due the relative peace in the area.

The troops, according to witnesses, killed about 10 insurgents and wounded others when they tried to infiltrate a military unit in the town.

Alhaji Lawal Wasaram, a former chairman of the council, confirmed the incident to NAN.

Wasaram said that the incident occurred at about 6:00 p.m. when a group of insurgents, moving on two trucks and motorcycles, tried to infiltrate the town from a nearby bush.

He said that troops deployed to the area intercepted and killed about 10 of them while many were wounded in gun duel.

Wasaram added that the troops also destroyed the insurgents’ vehicles, a situation which prevented them from attacking the town.

“The gallant troops successfully repelled the insurgent and protected the town from attack.

“It is difficult to ascertain the causalities; about 10 insurgents were killed and several others wounded in the failef attempt to attack Mainok,” he said,

Ha added that the locals and soldiers were currently celebrating victory in the town.

The military authorities are yet to comment on the incident.