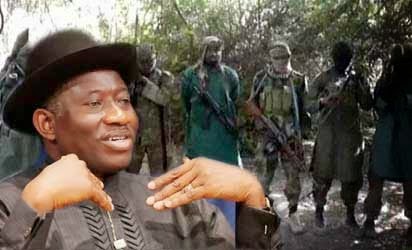 All Progressive Party, APC is after President Jonathan over his overdue ceasefire deal with suspected fake Boko Haram terrorists.

In a statement issued today in Lagos by Lai Mohammed, the party said Nigerians deserve to know how the Jonathan administration got swindled by an impostor, who the major players were and what the government plans to do to address what has now become a monumental national and international embarrassment.

“President Jonathan owes Nigerians an explanation on what has now turned to be an unprecedented global faux pas. Engaging in cheap damage control by insisting on the genuineness of the deal will only amount to taking Nigerians for a ride,”.

“Now the parents and indeed all Nigerians have been victimised for the umpteenth time by the same government that has failed in its main reason for existence, which is the security and welfare of the citizenry,”.

“The ceasefire deal with Boko Haram was announced at the highest level of the military and supported by the political authority on Oct. 17th. Now that it has been described as a fluke, there is every indication that the Jonathan administration was swindled by someone masquerading as a Boko Haram negotiator, while the administration itself went ahead to fool Nigerians as well as the international community. Whatever happens, the sole responsibility falls on the administration.

“Following the gleeful announcement of the deal and despite the doubts surrounding it, our party deliberately refrained from commenting on it and even wished it was real so that our long-suffering people can get some respite from the devilish terror group that has dispatched thousands into their early graves, maimed even many more and ruined the economic and social life of a large chunk of the society.

“Now that the deal is said to be a fluke and everything points to that, the Jonathan administration must be contrite enough to own up to its gaffe, if indeed it is one, or its contrived deceit, and also face the possible consequences from a stupefied citizenry. It cannot and must not just be another forgotten instance in a series of gaffes by a serial bumbling government,” .

This is the second time Nigerian Federal Government will get swindled by an impostor posing as Boko Haram represent. The FG has reportedly lost several millions of dollar to the impostor since 2013.