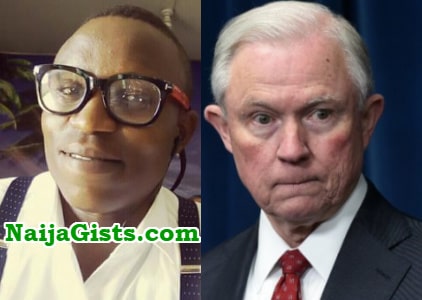 The suspect was remanded in prison custody by Ikeja High Court vacation judge, Ogala Oyindamola today following his not guilty plea to a five-count charge of possession of fraudulent documents.

The accused who committed the offence on the 29th of June 2018 was arraigned by the EFCC for Advance Fee Fraud and other Fraud related offences.

Here is what EFCC lawyer, A.M Ocholi said about the defendant today:

“The defendant goes by the alias Jeff Sessions and using the moniker, he created an e-mail address jeffsessions54@gmail.com.

“He had in his possession an e-mail correspondence containing false pretence titled: “Grant Money”, which he sent from that e-mail address to compbellellaine390@gmail.com, the e-mail address of an unsuspecting victim.

“Oluwaseyi had in his possession another e-mail correspondence titled: ‘Grant’ which he sent from his Jeff Sessions e-mail address to tomzglamorously@gmail.comwhich he knew contained false pretence.

“He also had sent an e-mail: titled “no subject” which he sent to daphebarney3@gmail.com, knowing same to be false.”

His bail application will be heard on the 10th of September but before then, Ikoyi Prison will be his temporary home.