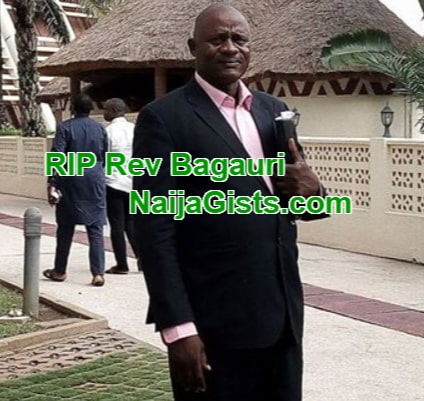 Reverend Denis Bagauri was killed at his residence in Mayo Belwa, some 70 kilometres south of the state capital, Yola, by suspected assassins

The attack came five days after similar incident on a journalist, Maxwell Nashion of Radio Nigeria (Fombina FM Yola) in his home in Girei, near central Yola.

Bagauri, who was of the Lutheran Church of Christ in Nigeria (LCCN), was attacked in the wee hours of Monday at the Nasarawo Gereng Area of Mayo Belwa, headquarters of the Mayo Belwa local government Area.

Many had made social media posting by 6.20 am Monday regarding Bagauri’s killing.

One of the deceased’s friends, Alhaji Muhammad Buba, who lives in Mayo Belwa, told our correspondent on phone:

“They killed him last night. A member of the family told me they have taken his corpse to the mortuary.”

Bagauri, a politician, became popular for his role as the voice of Christians in government when Murtala Nyako and Mohammed Jibrila Bindow were Governors.

He was liaison officer for Christians under Murtala Nyako.

He was called Pastor Nyako and served under Bindow as Senior Special Assistant on Religion Matters.