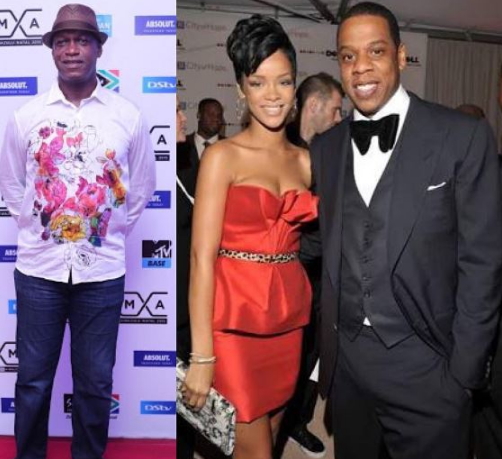 June 8, 2016 – Nigerian Sues Rihanna & Jay Z For Not Showing Up After Collecting Money For A concert In Lagos

Jay Z & Rihanna music label Roc Naton is being sued for allegedly collecting money for a concert she never gave.

The Work singer, 28, was allegedly booked to perform a show in Nigeria by Chris Ubosi and his radio station Megalectrics back in May 2013, TMZ is reporting.

Ubosi claims he made a deal with two individuals who represented Rihanna, Roc Nation and Jay Z with the promise that she would be paid $425,000 for a 65-minute performance at the Eko Hotel in Lagos – but a rep for Rihanna’s label says the promoter was the victim of a scam.

The promoter coughed up $160,000 in three installments but then he claims her people asked to push back the concert to July.
According to TMZ, Ubosi agreed on the condition that Rihanna alert her fans of the date switch on social media.

DailyMail has reached out to Rihanna’s representative for comment.

In his lawsuit filed in Manhattan Supreme Court, Ubosi claims that Rihanna never did mention the change on social media and so he and Megalectrics ‘demanded the full and prompt return of their money,’ the lawsuit says.

Ubosi claims he never got the $160k advance back and so he’s taking Rihanna to court.
Her label Roc Nation and founder Jay Z, 46, who is wed to Beyonce, have been named as defendants.

The Barbadian beauty and her camp, on the other hand, are saying Ubosi was the victim of a scam and that they had nothing to do with this deal.

‘Rihanna, Roc Nation nor anyone associated personally or professionally with either party was in contact with this person,’ a spokesperson for Roc Nation told TMZ.

‘Unfortunately this person was scammed. Rihanna nor Roc Nation collected any money for this event.’