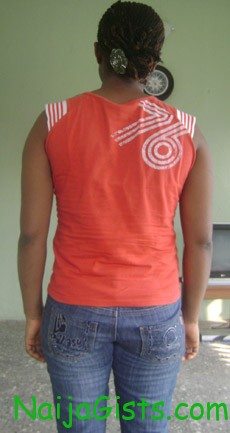 According to a report Naijagists.com obtained from The Saturday Vanguard, a teenage lady whose virginity was said to be intact after being tested positive of pregnancy is in a dilemma. Her story though far from the Biblical narrative of the Virgin Mary, strikes the mind on the possibility of remaining a virgin after she was raped by her own cousin, leaving her hymen intact but resulted in a pregnancy.

According to her, she woke up late that fateful morning and found herself wet with semen. She asked Onyeka what it meant but he was said to have waved it off as nothing important. Chinelo, naive, accepted his excuse and moved on.

“I woke very late, very dizzy even his mother noticed and asked me whether I was feeling alright that morning. I told her I was okay but when I went to the bathroom, I discovered I was wet but did not feel any pain. I asked him but he smiled and waved it off. I did not disclose to anybody. I just cleaned up.

“I finished my mensuration five days before then. I also wrote my NECO there but left after a week I finished my exams. I went back to Onitsha, and on the 27th of July, I came to Lagos to my sister’s house. There I missed my period. I told her and she advised that we should wait for some days, saying it might be a shift,” Chinelo said.

Chinelo began to notice symptoms of pregnancy after a month. “A month later, I felt sick. My sister and I thought it was malaria. But what later convinced my sister was when I started vomitting. Our neighbour advised we should go to the hospital. My sister obliged and we went to General Hospital, Aguda. They even gave me money for the test.

“It was on Sunday, so the lab personnel did not come. We returned home and went back the following day. A test was conducted and we waited for about 30 minutes. When the result came out, they wrote ‘malaria not seen and pregnancy positive’.

“While waiting, my sister had also taken her sick daughter to see a doctor. I approached a woman sitting close to me to explain the result to me and she looked at me and asked whose result was it, saying it indicates pregnancy. When my sister came, I gave it to her and she asked how come I became pregnant.

“I told her I didn’t know that I didn’t have a boyfriend. She took me to their head nurse who also is a counsellor. She tried to convince me but I maintained my position knowing it was the truth. They decided to take a virginity test on me with the aid of a machine. The result came out and it was confirmed that I am still virgin,” she narrated.

Then the pressure came. The medical team and her sister probed further and Chinelo broke the ice saying: “I remembered the incident in my aunty’s house and I asked whether if someone was wet without making love could result into pregnancy? They asked me who was with me and I told them how I saw myself wet that morning when I woke up. I further told them how I drank the juice and slept off. I did not know what happened again.

The medical team and her sister concluded that pregnancy could occur without a penetrative intercourse since her virginity was intact. But Chinelo maintained she had no idea of how it happened as she suspected she must have been drugged with the juice she was served after dinner.

In a raspy voice pausing briefly and looking down again, she continued, “They asked me to call him (my cousin) and tell him the situation to know his reaction. I did and I threathend I was going to tell everybody what he did if he did not tell me the truth. He pleaded that he would call me back.

He immediately sent a text massage to me, recommending some drugs to terminate the pregancy, asking me to go get it and take it immediately. I called him back asking him if he did not know anything about why he sent such message to me? I later got to know that everybody in the family took him on and he confessed to have done it.

Since then, he stopped picking my calls until last two weeks when I called him accusing him of causing my problem.”

She stated that it was not the first time she would sleep on the same bed with Onyeka but insisted she did not know how he did it.

Chinelo has already gained admission to study Mass communication at Delta State University, Abraka, Delta State but she would have to suspend her quest for further studies pending the delivery of the baby sometime in March 2012, all things being equal.

She however explained that the incident was too painful to contemplate but she had forgiven him, and would relate with him well anytime they meet again. Her words: “Forgiveness is of the Lord. I have already forgiven him. Recently, some people were of the view that I should call him with another number and reign curses on him but I said no.

“So also, when some of my brothers decided to involve the police, my mother objected, saying they should allow the sleeping dog to lie. Even if I see him anywhere I will relate with him well, I have forgiven him,” she said as her words fall over each other in a bid to assemble.

The overwhelmed lady is currently taking refuge at the Tamar Rescue Foundation, Lagos, a non-governmental organisation that sensitizes young girls on the menace of sexual abuse and rape and offers advice to victims and mentors them through lectures, seminars and empowerment programs.

Mrs Ugo Onwuraokoye the founder of the foundation, an Igbo also from Anambra state, said: “In Igboland, such incest is termed as alu (abomination) and I understand the young man who did this is having problems with his business and his whole life, just because this is an abomination. This is incest and because it is an abomination. It has its own curses.”

She disclosed that Chinelo would have to be with her pending the delivery of the baby. “They brought her to me and I have to accept the challenge because that is what my ministry Tamar Rescue Foundation is all about. Her story will teach others some lessons because some don’t know that playing around even without penetration can result into pregnancy because sperm swims.

It is one of the miracles of becoming a pregnant virgin. Her admission is through but she cannot go back to school now untill she delivers the baby. She will be here with us and after the delivery, Tamar Rescue will adopt the baby and she will continue with her studies,” Onwuraokoye said.

According to her: “Everyday a child is being raped. Since I started I have only been able to go 80 schools to sensitize them. Like the case of this girl, it is as a result of sheer ignorance, she didnt know and it occured five days after her menstrual period.

“Right now, she may not understand the full implication, she can’t go to school, her admission is out but she cant go until after she delivers the baby and other distractions that will follow it. By January 10, she will be six months gone in this pregnancy and yet she has not started anti-natal classes because there is no money, they just brought her to me.

And as it is, the parents are trying to be careful because in Igboland, this is an abomination. This is a shame. You see, everyday my heart aches because parents and children are acting in ignorance. I cannot allow my daughter to go to my sister’s house where I know my sister has a grown up son and sleep in the same room. I cant allow that because I am aware.”

She adviced that parents should always teach their children ways of avoiding this vices, adding that some parents want their daughters to look trendy allowing them to wear cloths that expose their bodies, noting that the heart evil men around is thinking a different thing; they are not looking at the young girl as a child but as a woman.

We only have one virgin Mary and I don’t know about any other. Girls come here with such claim and by the time you test them, you will discover that it is all lies. For me, until you confirm from the doctor who tested her virginity, I can’t believe the story. If she’s pregnant and claims to have been raped, it means that there was penetration.

I also don’t believe that pregnancy can occur by merely playing around the virgina without penetration because there must have been a penetration before an ejaculation and the sperm will locate where the cervica opening is and locate where the egg is before there can be pregnancy. In the absence of this, sombody claiming that sperm was splashed on the virgin or something, and resulted in preganacy, I won’t accept that.

Dr. Odiboh, an Obsterician said it is possible without penetration but advised that the days of the incident be confirmed and that the tests should conducted again.

One of the doctors at the Lagos State Teaching Hospital who prefered said: “You do not have to have sexual intercourse to be impregnated. Sperm can swim up the vagina if they are strong enough. The chances are, of course, much less likely but it’s still possible.

Any time sperm comes into contact with the vagina, there is a chance of pregnancy. However, the chance is obviously much larger when the semen is shot into the vagina, as opposed to just rubbed on the outside of it. The chances of a girl getting pregnant from a minimal amount of sperm touching the outside of her vagina is very slim.”

A further research on the issue revealed that one does not have to get involved into a sexual activity or intercourse, to be precise, for getting pregnant. All that is required is for impregnation is the sperms of a male partner that swim up to the vaginal opening and seek entry.

Most sperms are not capable of doing this, since they cannot survive in the atmospheric temperature. But some viable and strong ones do it. Such chances are, of course, slim, yet possible is everything. Also, if there is intentional sexual activity, but without penetration, then the released sperms can find some medium to reach up the female vagina and begin to act.

Since, signs of pregnancy are seen in later months after having the impregnating intercourse, there is no way of recognizing that a female has become pregnant without losing her virginity. It is simple. If the ejaculation of a female’s male sexually partner reaches her vagina, though there had no penetration taken place, then she can get pregnant and remain a virgin.

A sperm can live up to 24 hours after it is ejaculated out of the male body and before it begins its action of hatching the female egg. If, within these 24 hours it reaches inside a female vagina and begins its job, then there are quite favorable chances that she would get pregnant, though her virginity is intact. Thus, just being virgin does not guarantee one of a ‘no’ on pregnancy reports. But rather than that, follow the simple rule of never bringing the male genital organs near a female’s, if you really do not want to face an unwanted pregnancy, especially a virgin.

Once again, this year 2011 is full of wonders and surprises.

How possible is it for a virgin to get pregnant.  Let’s discuss guys.