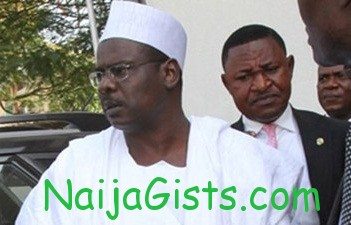 A prosecution witness, in the trial of Senator Aliyu Ndume over alleged financing of terrorism, Usman Aliyu, has told a Federal High Court that in the course of investigation, it was discovered that 73 communication contacts were made between the senator and the convicted spokesperson of the Boko Haram sect, Ali Sada Umar Konduga (aka Usman Al-Zawahiri).

Konduga was convicted after pleading guilty to the charge preferred against him by the State Security Service (SSS). The witness further added that the communication took place between October 3 and November 3, 2011 stating that such communication included voice call, SMS and MMS.

He also stated that further forensic analysis carried out on the two mobile phones, Nokia E7 and Nokia 2700 belonging to Ndume and Konduga respectively, showed that the first SMS was sent from Ndume’s phone to that of Konduga on October 3, 2011.

But when the prosecution counsel, Johnson Olatigbe wanted to tender the report of the witness, contained in three different DVDs after the examination of the two phones, the defence counsel, Ricky Tarfa (SAN) objected to the admissibility of the items on the grounds that there was no evidence before the court that the items seeking to be tendered were primary evidence.

Tarfa said the DVDs were computer generated evidence, which required a backing statement to authenticate the veracity of the items seeking to be tendered and prayed the court to reject the DVDs. While urging the court to admit the items as exhibits, the prosecution counsel said it was the responsibility of the court to look and admit them as exhibits.

After listening to the submissions of parties in the matter, the trial Judge, Justice Gabriel Kolawale reserved ruling till Friday, December 14 on admissibility of the items the prosecution was seeking to tender.[Credit: DailySun]