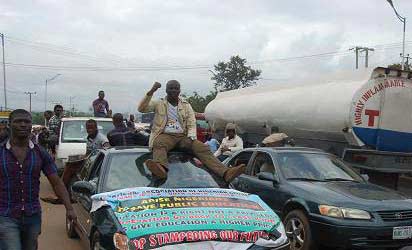 The  All Progressives Congress (APC) has condemned the Federal Government’s  insincere and amateurish handling of the strike that has paralyzed  academic work in public universities in the country for the third month  running.

In a statement issued in Abuja,Wednesday by its Interim  National Publicity Secretary, Alhaji Lai Mohammed, the party said the  tepid and half-hearted way the government has handled the strike has  shown that it does not place much premium on education, which is the  path to national development.

It said there is no better  indication of the government’s disdain for education than the fact that  the Jonathan Administration has continued in its profligate ways even as  students caught in the web of the strike remained at home when they  should be engaged in serious academic work.

APC said since the  strike started, the Jonathan Administration has thrown at least two  mega, money-guzzling dinners in Abuja, perhaps the best example of the  aphorism ‘Nero fiddling while Rome burns’. In one of such frivolities,  the President and his party folks feasted joyously at a post-PDP  convention dinner even as hapless students were bemoaning their fate  over the strike.

The party said it was also in the midst of the  strike that the First Lady organized the so-called peace rally  that brought hundreds of unsuspecting women to Abuja in what later  turned out to be a march of shame. The Abuja gathering must have guzzled  millions of naira.

”It is particularly  shocking that the government has carried on as if everything is normal,  without bothering about the fate of the students who have been marooned  at home since the strike started.

Perhaps this is because the children  and wards of those at the helm of affairs are luxuriating in schools  abroad, or because they are too comfortable to worry about their  less-fortunate compatriots,” it said.
APC also said the fact that  the strike has persisted despite President Goodluck Jonathan’s  directive, widely reported by the media, to the FG’s negotiating team to  do everything possible to end the strike, says a lot about the  Administration’s credibility.

”In fact, the negotiations between  ASUU and the Federal Government were called off two days after the  President issued his directive. So much for credibility!” the party  said.

APC reiterated its earlier call on the FG,to immediately  implement the agreement it willingly reached with ASUU in 2009 and stop  wasting its energy on why the agreement cannot be implemented, saying:  ”Agreements are meant to be respected, not  repudiated.”