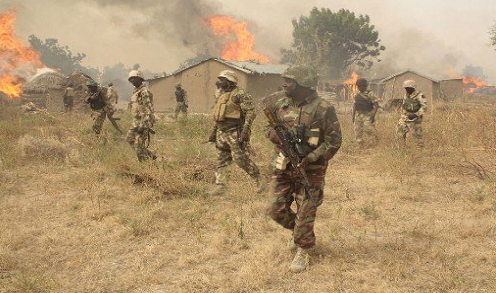 The military today confirmed the killing of 10 suspected Boko Haram fighters after a clearance operation in Gamboru-Ngala, Borno.

Col. Sani Usman, the Acting Director of Army Public Relations, revealed this in a statement in Maiduguri.

Usman said that two other suspects were captured alive by the troops during the operation.
He said based on information received that the terrorists earlier dislodged at Chukungudu and Hausari villages were migrating towards Muska village in Gamboru Ngala Local Government Area, troops of 3 Battalion, 22 Task Force Brigade, conducted operations in the area.

“During the encounter, the troops killed 10 Boko Haram terrorists, captured two alive and rescued a woman with her baby held hostage by the terrorists,” Usman said.
He said that the troops also recovered arms and ammunition during the exercise.

Others included one Digital Multimetre, six SIM cards, three memory cards and one Airtel Modem containing memory card.
He said that the captured suspects were undergoing interrogation by the military.
“The captured terrorists are undergoing preliminary interrogation while the rescued woman and her child are receiving necessary attention pending onward movement to Internally Displaced Persons (IDPs) camp.

“Similarly, another element of the battalion also conducted another fighting patrol to Wumbi village based on received information on the presence of remnants of Boko Haram terrorists in the area.

Usman also said the troops were facilitating humanitarian assistance by supporting both government institutions and NGOs working with IDPs.

He also said troops provide security for officials of the International Committee of the Red Cross.