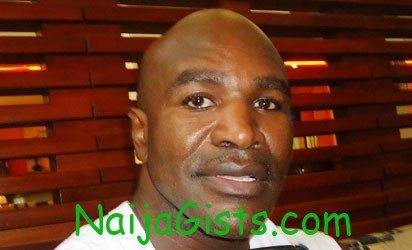 The former heavy weight boxing champion said he would visit some oil spill sites in Ogoni area of Rivers state to draw global attention to the environmental challenges occasioned by oil exploration in the area.

Holyfield who won a bronze medal at the 1984 Los Angeles Olympics later defeated James Buster Douglas in 1990 within seven minutes to become world heavy weight boxing champion. He lost the title to Riddick Bowe in 1992 and got it back in 1993. He lost it again the following year to Michael Moorer .

He beat Mike Tyson in 1996 to win the title again. In their second encounter, Tyson bit his ear twice, an act many of his fans saw as the most dramatic experience in his boxing career. In 2000, Holyfield beat John Ruiz to win the WBA championship the fourth time but he lost it to the same Ruiz the following year. Besides being a four time heavy weight boxing champion, Holyfield also won other boxing laurels.

In this interview, he speaks extensively on his private life and the motivational factors that got him to the top in his chosen career. He urges youths all over the world never to give up after any mistake, that they should get back on the right path with their eyes focused on their set goals.

Tell us about yourself and why you are in Port Harcourt.

I am Evander Holyfield. I was told the situation of oilspill is bad. I am here to talk about the responsibility and about what is going on here.

Are you coming in on the platform of a non governmental organisation or as Evander Holyfield?

I am coming here as myself but I am being sponsored.

What have you heard about the Ogoni area that has made you to come?

I can’t talk openly about something that someone just told me. I will like to see for myself .

Your fans will want to know more about your private life. Are you married?

Are you into any relationship?

O! No! No! But I have kids, I have eleven. I have six boys and five girls and I am trying to put them on the right path, trying to tell them how not to make the same mistake I made. Hopefully they won’t make the ones that I made.

What were some of the mistakes, your admirers may want to know?

Well! The mistakes I made well had to do with women because I was raised without a father. My mother was my heart, my mother raised me and she did a great job. I came from what you call the very poor and became wealthy because I was able to do all my mother asked me to do.

But a lot of mistakes I made were because I did not have a father that was there. And I guess a part of the mistake was believing in everything that a woman says because I believed everything that my mama said. I did not have a father who would have said you have got to do this. I have kids by six women and so all the mothers are different which allow the kids to be different and which make my work a little hard.

I love all my kids and I’m doing the very best I can to shape them. Everybody makes mistakes but don’t quit because of the mistakes you made. You just make adjustment. You are blessed if you have both parents and you are blessed if you listen to them. I became who I am because I really love my mother and I did what my mother asked me to do. That allowed me to be in the position I am. I met my father when I was 21 and I understood why he and my mother did not stay together . Before my father passed on, we had a great relationship. But here I am, my coming here gives me opportunity to show that life is about helping to get up those that have made mistakes. We all can make adjustments to make the world a better place. If you make mistakes, you can change and this is my position in life.

You still cut the look of a young man, are you likely to be hooked up again to a woman?

I want to get married again but my focus now is to be able to help somebody else, help this world to be a better place. I will get married to a person that will help in what I want to do in life.

You are a four time world boxing champion. Whatfactors drive you to the top with your fans?

When I turned twenty one, I made the Olympics. I lost my first match when I was thirty, my mama said if you quit, you won’t reach your full destiny. And my goal was being the very best. Because I did not quit and I had a goal, I got to the top, I strived. We all can make this world a better place.

I am happy to be in Nigeria. I like the people. I am black. I have been all around the world, have been with people, with white, yellow and all the different colours. I have always said we as blacks can come together and pretty much do the same thing that other people do.

My opportunity as a kid came through white people, people they looked at me and said, oh this is a great kid.

They gave me all the things I needed. My mama did have no money, my mama had knowledge, she spoke to me. These guys gave me the opportunity, they say to me, if you don’t quit, we won’t quit, we are not going to run out of money, so you keep going. I was brought up without a father but I had all these people who gave me the opportunity. If we come together and have a goal, we will be successful. I am the youngest of nine in my family.

I want to be a help, taking people to another level. This is what love is all about,not just thinking about yourself, but what your grand kids are going to be.

Drug addiction is a major problem among people of your status and it is gradually becoming an issue among youths in Africa, any word for the youths?

The Bible tells us we just come into the world, we are just here. My teacher was hard on me. I was told that I look just like a black man is supposed to look; my sister helped me get my self esteem. People should learn to love themselves. I was blessed to have read the Bible.

Who introduced you to the Bible?

My mother and my grand mum. One important thing I have learnt is that being a man and being a woman is different. My mama, grandma, they talk, they got never stop. I did not know that is the driving force, they made the change in me. My mama, ma grandma they made me know about the world of God.

Are you attached to any church?

Sure yeah. I go to World Change Ministry, is in the United States.

You are from a family of how many and are you the last?

How do you see Nigeria?

They appear to be happy people. Though you don’t make assessment in one day or hour. It takes your whole lifetime to make assessment. I have learnt, you know I am 49 years old. I will take time to assess. This is a country with great wealth. There are so many wealthy people here. They own everything. Communication is blocked, in America, they make us feel that everything over here is bad but my mama say that the very best people they travel to see for themselves. I am a blessed person so I have travelled round the world. And I know that in every skin colour you have the good and bad. I know that there are good people in the country. You reap what you sow, you sow love you get love.(vanguardngr)