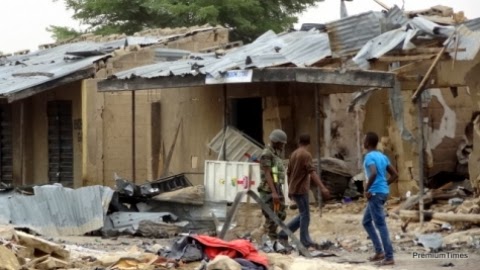 39 people were brutally murdered last night in Borno state village of Mainok, 60km away from Maiduguri, the state capital, where a twin blast had killed at least 52 on the same day, security sources and witnesses said.

An officer at the Department Security Service, who asked not to be quoted as he was not authorized to speak said the attack on Mainok also left the farming community completely razed down.

Mansur Buba, a commercial cab driver in Mainok said he participated Sunday afternoon in the burial of those killed in the attack.

“I was so lucky to escape the attack because I had to convey passengers to Maiduguri and pass the night there; the attackers arrived Mainok less than an hour after I left, but sadly some of my cousins were not lucky. The gunmen rounded up the village and began to shoot, setting fire on buildings. Many people were injured as well; some are fleeing as I am talking to you now. I had to quickly leave Mainok for Maiduguri because there is fear everywhere”, said Mr. Buba.

Borno state Police Commissioner, Tanko Lawan, did not respond to calls to his phone.

Many travellers from Maiduguri are said to have shelved their journey as Mainok lies on the highway leading to Kano the largest city in northern Nigeria. It shares same Local government with Banisheik which is just 10km further.

Both Mainok and Benisheik, located West of Maiduguri have suffered several attacks by the Boko Haram insurgents especially within last year.

The attack on Mainok coincided with the twin blasts that rocked Ajilari suburb of Maiduguri on Saturday evening.

A PREMIUM TIMES reporter who visited the scene of the blasts was told by witnesses that 51 persons died as a result, while several others got injured.

A Red Cross official confirmed that children made the top list of the casualties.

A leader of the Civilian-JTF, Hassan Ali, said the bombs detonated from two different vehicles.

“The first blast came from a pickup van carrying firewood, and the second from a Volkswagen Golf Salon car,” he said.

Mr. Ali said the first driver drove into a street called Bintu-Suga and packed, and then hurriedly moved into one of the shops as if he was trying to buy something, then the pickup exploded. Few people including the driver died and many were injured.

“As we were trying to rescue injured persons, then boom, the second one went off but this time killing and injuring more people,” he said.
Close to the scene of the blast was a cinema where a DJ was also playing music for fun seekers at a wedding reception.

Some of the youth who laboured all night to rescue the victims trapped under rubble insisted that there were people under the fallen walls but have no facilities to dig under, Mr. Ali said.

Another eyewitness said the second bomber in the Volkswagen Golf was seen abandoning his car and snatching a tricycle from a spectator, with which he attempted fleeing.

“Everyone was confused thinking the man acted out of fear, but in less than 30 seconds after, the car he abandoned exploded, so we then saw him abandoning the tricycle and continued fleeing on foot. That was when some of us raised alarm and rounded him up,” said a Civilian-JTF member, who identified himself as Isa Adamu.
The Maiduguri blasts has angered the youth who now accuse the government of weakening the Civilian-JTF by training some of them and giving them uniforms under the government scheme called Borno Youth Empowerment Scheme (BOYES).
The angry youth argue that paying some few members of the Civilian-JTF stipend as BOYES officials, had dampened the spirit of the “real Civilian-JTF” who would in the past go after members of Boko-Haram.