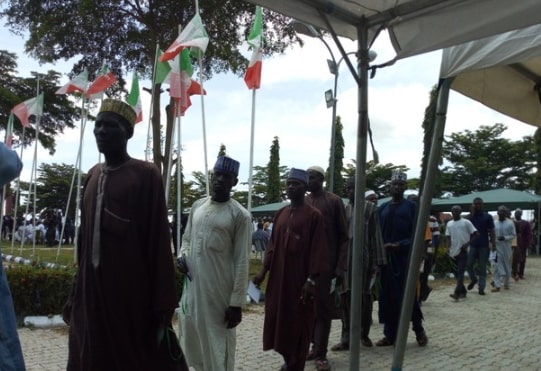 The Biggest Spenders Win! How Nigerians Sold Their Consequence For Pitiable N500 To Vote Corrupt Money Bags Into Power

We love to complain about virtually everything in Nigeria. No power, no decent healthcare, no good roads, high crime rate, corruption, the list is almost endless!
Yet despite the obvious copious problems bedevilling the country, it is clear that we as a people (or at least the majority) are not ready to do anything about it.
In fact, it is clear that the majority of us are resigned to leaving everything to the Almighty to help get us out of the pitiable situation we have found ourselves.

The just concluded national primaries the various parties conducted to choose the people who will go into next year’s general election was a good opportunity for complainants to publicly show the politicians that we are not happy with our plight – but sadly, we passed up the opportunity big time.

If reports of the various primaries are anything to go by, for a pitiable N500 people literarily “sold” their consciences to vote for those that doled out the money which cannot in all honesty cover a decent meal in the present clime.

But for the thousands who collected the money, they could not be bothered with the wider implications of their folly because for them, they have at least “enjoyed” something from the contestant, whom they may never see or benefit from again until the next primary election in four years’ time.
And thus by their myopic action, they have ensured that the millions of Nigerians who are not card carrying members of the various parties (over 90 of them at the last count) are already disadvantaged ahead of the February poll because it is only those that are on the ballot paper that they can vote for.

More often than not, the name on the ballot paper is not the best candidate, but most likely the candidate that “bought” the most votes during the primaries.
It is thus little wonder that despite the 19 years of unbroken democracy, more Nigerians are worse off than before the advent of the Fourth Republic in 1999.
Incidentally, even before the return to democracy, the late Afro beat legend, Fela Anikulapo Kuti had repeatedly sung about the deplorable conditions of his countrymen.

In fact, in one of such songs titled ‘Original Suffer Head’, which he released in 1981, he alluded to the fact that despite Nigeria being blessed with so many resources, it was unbelievable the conditions the people were living under.

But what clearly galled the musician was that in spite of this, the people appeared to have resigned their fate to their pitiable plight.

Although he touches on so many issues in the song, let’s take a look at what he said about housing.
“House matter na different matter
Those wey dey for London dem
Those wey dey New York dem
They live dey like kings
We wey ele for Afrika
We dey live like servants
United Nations dem come
Get name for us
Dem go call us under developed nation
We must be underdeveloped
To dey stay ten-ten in one room O
First and second dey
Dem go call us Third World
We must dey craze for head
To dey sleep inside dust-bin
Dem go call us none-aligned nations
We must dey craze for head
To dey sleep under bridge O”

Sadly more than 37 years after he released this song the housing situation not only still exists but has even gotten worse. And yet we have had multiple governments who have each promised to improve the lot of the people after castigating the government they are replacing.

But by the time they leave, we are even in more dire straits than the government they had criticised.

For instance on a television station last weekend, a supporter of one of the Peoples Democratic Party (PDP) contestants, who lost to former Vice President Abubakar Atiku in the race for the party’s presidential ticket, was quick to tell viewers that the present ruling party, the All Progressives Party (APC) had failed the people in all intents and purposes.

Insisting that “facts and figures do not lie”, he cited the example of the cost of a bag of rice.

According to him: “Going into Christmas of 2014, the cost of a bag of rice was N9,000. But what is the cost of the same bag now – it’s between N15, 000 and N18, 000 so how can they (APC) say they have done better?”
Of course on face value his argument cannot be faulted because things are definitely tougher in the present clime than back in the day. But then some of us can also equally still remember when a bag of rice did not even cost more than N1500 – and that was only in the late 90s!

The same can be said for virtually every other thing – prices have shot up astronomically while the living conditions of the masses have gone the opposite way.
The question of “buying” votes is not just limited to the two main parties – APC and PDP; but virtually all the parties were complicit in the same vice as desperate politicians sort to secure their parties’ tickets to the various elective positions open to them.

Unfortunately, the flaws in the electoral system was not only limited to “settling” voters, even the desperate politicians put those screening them under intense pressure to clear them to contest.
According to reports, many of the members of the various screening committees of the parties saddled with the responsibility of ensuring only eligible candidates were given the green light to contest, ended up becoming “millionaires” after the exercise as they were enticed with various sums of money to pass the aspirants.

In fact, one of such committee members was reported to have defended their action on the ground that this “was the only time they (committee) can make money. Once they (aspirants) win they never remember us”!

Thus at the end of the so-called screening exercise, virtually every “Bayo”, “Uzo” and “Haruna” is given a clean bill of health to contest even when it is obvious that they have dodgy characters.

In view of this, is there any wonder why we have become a nation of complainers?.

And we shall continue to complain until the time we finally collectively decide as a people that enough is enough and we will no longer allow pittances becloud our proper judgement in choosing those to run for elective office.

[Culled from TS From The Sidelines]

Buhari Begins Damage Control Months To Reelection, Sends Delegates To Leah Sharibu Family 8 Months After Abduction
Obasanjo Is Inconsistent, He May Change His Mind & Withdraw Support For Atiku Before 2019