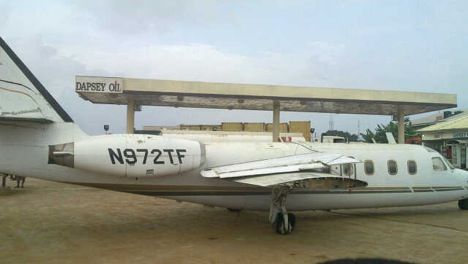 The attention of the Nigerian Airspace Management Agency (NAMA) has been drawn to a purported plane crash yesterday at Igando, a suburb in Lagos State.

This morning, we were inundated with phone calls and enquiries  over  a crash involving  a small aircraft but there is nothing like that ,it is a hoax  because our system did not capture any missing plane’’,the managing director of the agency, Engr. Mazi Nnamdi Udoh affirmed in Lagos on Thursday  while  dispelling the rumour.

NAMA boss said in a statement that the aircraft in question is actually a junk one belonging to Late Apostle Gabriel Oduyemi of Bethel Ministries and had long been parked at a NAMA facility up till Wednesday night when it was eventually removed.

The aircraft was actually released to Captain M.J.Ekehinde who will be using it for educational purposes in Badagry, Lagos. A cross section of the wings was removed to ease transportation to its new location.

I affirm again that NAMA facilities are working at optimal level and this could have assisted in detecting any missing plane within the nation’s airspace.
While we appreciate the concern of the public on sighting the plane at an unusual site, we urge that people should always contact police and local government officials for proper information before spreading the news on incident involving any aircraft.