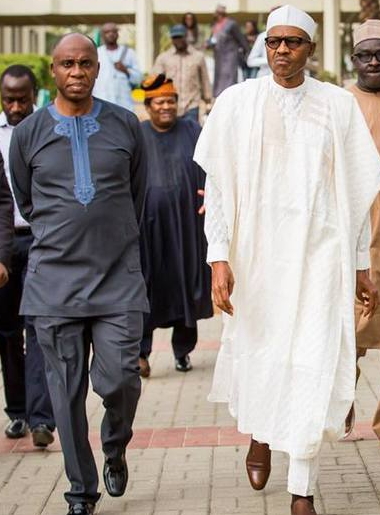 The defeat of PDP- led government by Buhari tsunami as it were marked the beginning of unending exhibition of frustration and grounded hatred towards the government of Change. While this is clearly understood given the pathetic scenario the sympathisers of formal President Jonathan found themselves, it is pertinent they stop crying more than the beriefed. After all, Jonathan had long moved on with his life, even though public shame is still beckoning on the formal first lady his precious wife.

It is no news that the waves of activism in Nigerian since the emergence of PMB is appalling and nothing he would do to please them and to say the electioneering is over with the big lost gasping and trashing in self-inflicted pain. Whilst, PMB does not belong to anybody or interest rather the President and Commander-In- Chief of Armed Forces Federal Republic of Nigeria who swore to protect Nigerians.
This is unfair to a man who only spent 6 months on the throne. Surprisingly, Nigerians under the last government never witnessed this humongous activism in the waves of impunity and unending corruption, rather mute and a pat on the back for money well- looted.

How clean and honest can one get? When he said in his maiden speech “I belong to no body and I belong to every body.” Yet they are restless with reckless questions ranging from preposterous to lugubrious. Oh baba go- slow- and steady is yet to name his advisers! but behold when he eventually does the same embittered individuals accused him of lopsided appointments on the premise of pursuing Northern Agenda, may be he should have named Orubebe as chief of defence staff or Deziani Alison Madueke as first lady federal republic of Nigeria.

Oh the delay in appointing his ministers potent danger for Nigerians as there is no economic direction! yet there is unimaginable improvement of electricity supply across board, as well as enough petroleum products in all our filling stations in whatever region in Nigeria.

Oh he should not have appointed himself as Minister of Petroleum where he ought to have assigned himself Defence potfolio as the questions rages on. For God sake! how have these irrelevant questions put food on our table? Or changed the good intention of Mr. President? We all have roles to play in order to bring about the needed change through constructive criticism.

What an irony? now that the ministerial lists have been unveiled, what did we get? Oh his Right Honourable Rotimi Amaechi should not be on the list because in their thinking he is corrupt based on media trial orchestrated by Wike and co. Limited.

It is a know fact that since the inception of our democratic rule in Nigeria, no single individual is so patriotic and nationalistic-outlook than his Excellency, Right Honourable Rotimi Amaechi. His doggedness, charismatic persona and sterling ever- intimidating records rates him the greatest Nationalist of all time. Whereas, we are bold to say that not even Sir Ahmadu Bello, Tafawa Balewa, Obafemi Awolowo to mention these prominent, were Nationalistic in their true sense, compared to mountain everest feet achieved by Rotimi Amaechi in recent time. This is a man who care less of promoting politics of regionalism other than the unity of this great nation.

Without mincing words, His Excellency Right Honourable Rotimi Amaechi is the most detribelised Nigerian, the Tinubu and the Nelson Mandela of Southern Nigeria. He is indeed a classic example of zero to hero, grass to grace politician ever to be alive on African continent, a rock of intellectual heritage with which Nigerian youths dwell except those who have refused to belong to his school of thought.

Of course, no man is without sins but that of Rotimi Amaechi is obvious for not supporting “Corruption is not stealing or stealing is not corruption government”, and for this single reason he is regarded as the political Judas Iscariot that must be sacrificed on the alter of mediocrity, yet he refused to be intimidated by the power that be into accepting a GEJMATICS formula of 16 greater than 19, not to talk of constant harrassment in the hands of Joseph Mbu and Marilyn ogar respectively.

Let it be on record that His Excellency Right Honourable Rotimi Amaechi scale through the Ministerial screening as no amount of arm-twist, executive intimidation, overnight imaginary corrupt- charges, paid protest and heaven and earth public condemnation would stop his emergence, as we would stop at nothing to barricade National Assembly, if need be followed the golden legacy of jumping through the fence should unimaginable happened.

It is a must Rotimi Amaechi becomes a Minister, this is our stand and the better the South/ South accept him as one of their own as well as their true hero, the better for their well-being, as the history of Nigeria’s emancipation from the shackle of corrupt-government would be incomplete without his Right Honourable.

Some Nigerians hate reality despite six months of his ascendancy, PMB never told anyone he was looking for saints or angels to constitute his cabinet rather a necessity to clean-up the mess left-over by the past administration, but of course the PDP in her usual rhetoric succeeded in the gullibility of Nigerians who would stop at nothing to dwell on cheap blackmail and propagandism. It would be unthinkable for anyone to read the mind of PMB, yet PDP stewards in their intellectual-shortfall taught the best they can do is to deploy the fifth columnist in order to tarnish the image of Fashola, Amaechi and the likes, except they are still leaving in the limbo of election defeat, it is appropriate for PMB to reward his loyalists. Ironically, those crying woooooe to high-heaven in the name of protest, social media balbadash never voted for Change in the first place, rather they made a caricature of entire episodes by foolishly investing in “stealing is not corruption government”.

The truth of the matter is that frustration on account of election defeat is responsible for the media hullabaloo, and until we send them to lagoon in the wisdom of Oba of Lagos Rilwan Akiolu, this time not to perish but to have a salty bath, they shall continue to languise in intellectual -sodomy amid joy and hope that PMB brings Nigerians.

At least for the first time we are doing things differently, if PMB should succumbed to blackmail, intimidation and propaganda, I do not think we are where we are at present but a General would always remain a General no matter whose ox is gored, as trusting his judgement is the least of our emotional investment.