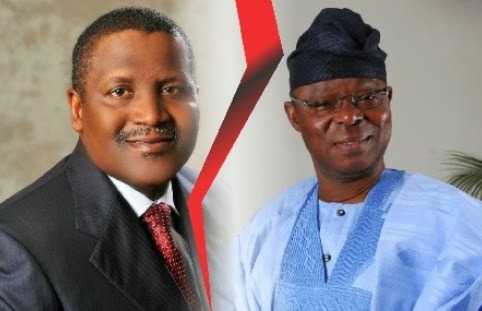 A legal battle is currently ongoing between billionaire businessmen Aliko Dangote and Oba Otudeko over a portion of land at Apapa Port rages.

The plaintiff in the case Honeywell has tendered documents to support his claim against Dangote and others.

The documents were tendered through the property manager of Honeywell company, Mr Olakunle Fasogbon, while the court adjourned till 9 April for the witness to be cross-examined by counsel of the defendants.

Oba Otudeko’s company is claiming the sum of $48 million as damages from Dangote and other defendants for breach of contract.

Some of the documents tendered and admitted as exhibits include notice of intention to commence suit against NPA, certificate of delivery of parcel address to NPA, notice of intention to commence suit against Bureau of Public Enterprise, BPE, evidence of delivery of letter of delivery to BPE, NPA letters addressed to Honeywell Group Limited, bundle of digital pictures before taking over of the site, bundle of digital pictures after taking over the site, NPA’s letter addressed to managing director of Honeywell Group Limited, another NPA’s letter addressed to project manager Honeywell Group Limited, copy of NPA official receipt number 0150703 dated January 23,2002,and a copy of Universal Trust Bank cheque dated June 22, 2000, issued in favour of PZ Industries Plc.

However, the presiding judge, Okon Abang, while adjourning the matter, said that it was to enable the court attend other litigants’ matters.

The matter was adjourned till 9 April for continuation of trial.

Otudeko’s counsel, Dr. Joseph Nwobike, SAN, told the court that he needed time to study some of the exhibits to be tendered in the matter and to file a consequential amendment in view of order made by the court granting the amendment brought by the third, fourth and fifth defendants in the suit.

He made the oral application for adjournment, after a witness, Mr. Olakunle Fashogbon, a property manager with Honeywell Group had been called to witness box.

However, the adjournment application was objected by the counsel to Dangote and his company, Professor Taiwo Oshipitan, SAN, and Chief S. O. Sowemimio, counsel to Nigerian Ports Authority.

Otudeko, Chairman of Honeywell Group, filed the suit in 2006 before Justice Ramat Mohammed, claiming $48 million against Dangote and other defendants as damages for breach of contract over 10.8 square metres of land within the Apapa Ports Complex, known as the 5th Apapa Wharf. (NAN)