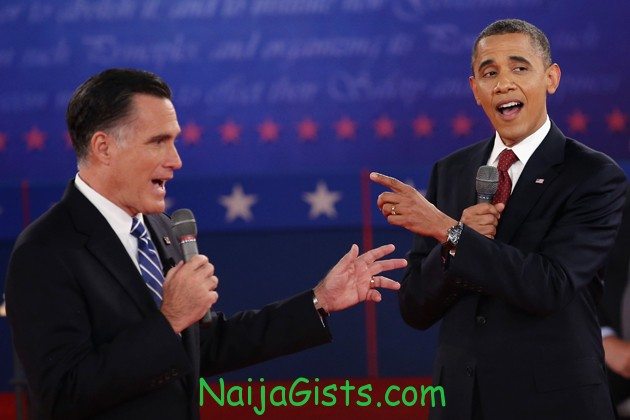 BOCA RATON,Florida (AFP) – Barack Obama pummeled Mitt Romney as “all over the map” on foreign policy, dismissing his “wrong and reckless” positions in the heated final debate of a knife-edge White House race.

With just two weeks until polling day, Obama has unexpectedly found himself running neck-and-neck with a challenger who had long trailed him, and Monday’s face-off on world affairs was perhaps a last chance to land a decisive blow.

“I know you haven’t been in a position to actually execute foreign policy, but every time you’ve offered an opinion, you’ve been wrong,” President Obama told his foe, coming out swinging in the debate in Boca Raton, Florida.

Republican challenger Romney played it safe, avoiding any catastrophic error that would have undermined his bid to be commander-in-chief, but was often on the defensive, apart from when lambasting Obama over the struggling economy.

“Attacking me is not an agenda,” the former Massachusetts governor told the president, and renewed charges that Obama had mounted “apology tours” abroad, prompting the president to accuse him of telling a “whopper.”

Obama had the best lines of the night and sharply cross-examined Romney on his approach to Syria, Iran and trade rows with China, accusing him of “airbrushing history” by dumping earlier hawkish conservative positions.

The Republican, who has spent months attempting to paint Obama as a weak appeaser, actually backed much of the substance of the president’s global strategy, courting wavering voters ahead of the November 6 election.

In a clear bid to moderate his image, Romney endorsed Obama’s decision to withdraw from Afghanistan in 2014, supported the president’s lethal drone war against terror suspects and congratulated him on hunting down Osama bin Laden.

Romney vowed to press China harder on trade and currency issues but toned down earlier rhetoric, following warnings his approach could spark a trade war.

“We can be a partner with China. We don’t have to be an adversary in any way, shape or form,” he said, despite his vow to brand Beijing a currency manipulator on day one of his presidency.

Oddly, neither candidate mentioned the eurozone crisis — widely seen as the country’s biggest external economic threat — aside from Romney reprising his warning that the debt-laden US economy under Obama was “heading toward Greece.”

An instant poll by CBS News found that Obama won the debate by 53 percent to 23 percent, after a clash that appeared to polish his leadership credentials and saw him showing the passion missing in his disastrous first debate.

But foreign policy is seen as unlikely to decide the election, with voters preoccupied by the sluggish economy, and it will take several days to gauge whether the clash had any impact in the tied up polls.

Dotty Lynch, professor of Public Communication at American University, said that by agreeing with Obama on foreign policy — the incumbent’s strong suit — Romney had tried to maneuver the evening onto more favorable ground.

“By agreeing on the big points of foreign policy, Romney played it safe tonight and tried to move the conversation to the economy, where he thinks he’s stronger,” she said.

George Washington University professor Chris Aterton said Romney may have won over some independent voters simply by showing that he is not “the dangerous, wild conservative that Obama has been trying to portray him as.”

Obama looked bemused, puzzled and exasperated by Romney’s tactics, staring intently at him as he spoke, apparently trying to keep frustration in check.

The president accused his opponent of being “all over the map” on a wide range of issues and dismissed Romney’s claims that that he had run down the armed forces to levels not seen since early in the 20th Century.

“You mentioned the navy, for example, and that we have fewer ships than we did in 1916. Well, governor, we also have fewer horses and bayonets because the nature of our military’s changed,” he said, to laughter from the audience.

“We have these things called aircraft carriers where planes land on them. We have these ships that go underwater, nuclear submarines.”

Romney, a former Massachusetts governor, warned Islamic extremism was rampant in post-Arab Spring societies and blamed a lack of US leadership over the last four years, warning “we can’t kill our way out of this mess.”

Romney demanded tightened sanctions on Iran over its nuclear program, saying the country’s leaders “saw weakness where they had been expected to find American strength” and accused Obama of neglecting close ally Israel.

The president, who withdrew troops from Iraq, pointed to Romney’s past statements in support of maintaining an unpopular US military presence in the country, invaded in 2003 under former Republican president George W. Bush.

And he mocked Romney’s previous statement that Russia was America’s top geopolitical foe.

The rivals are effectively tied in national polls after Romney surged following his first debate win in early October and started chipping away at Obama’s foundation in the swing states that will decide the election.