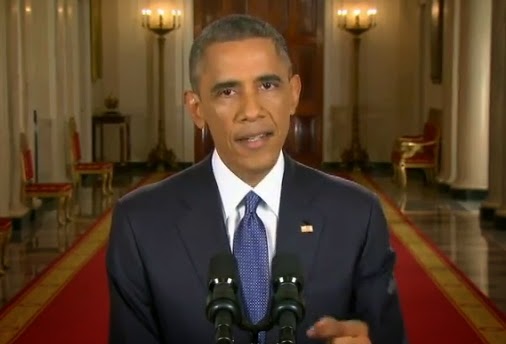 President Jonathan yesterday spoke about his commitment to delivering over 5 million illegal immigrants in the US from the grip of deportation. This was communicated via a live broadcast that was not aired on major News channel in the US.

The video of Obama 2014 immigration reform speech has been uploaded to YouTube and other online news channel.

Watch the full video below and see the transcript after.

Are we a nation that educates the world’s best and brightest in our universities, only to send them home to create businesses in countries that compete against us? Or are we a nation that encourages them to stay and create jobs, businesses, and industries right here in America? That’s what this debate is all about.

We need more than politics as usual when it comes to immigration; we need reasoned, thoughtful, compassionate debate that focuses on our hopes, not our fears. I know the politics of this issue are tough. But let me tell you why I have come to feel so strongly about it. Over the past few years, I have seen the determination of immigrant fathers who worked two or three jobs, without taking a dime from the government, and at risk at any moment of losing it all, just to build a better life for their kids. I’ve seen the heartbreak and anxiety of children whose mothers might be taken away from them just because they didn’t have the right papers. I’ve seen the courage of students who, except for the circumstances of their birth, are as American as Malia or Sasha; students who bravely come out as undocumented in hopes they could make a difference in a country they love. These people our neighbors, our classmates, our friends they did not come here in search of a free ride or an easy life. They came to work, and study, and serve in our military, and above all, contribute to America’s success.

Tomorrow, I’ll travel to Las Vegas and meet with some of these students, including a young woman named Astrid Silva. Astrid was brought to America when she was four years old. Her only possessions were a cross, her doll, and the frilly dress she had on.

When she started school, she didn’t speak any English. She caught up to the other kids by reading newspapers and watching PBS, and became a good student. Her father worked in landscaping. Her
mother cleaned other people’s homes. They wouldn’t let Astrid apply to a technology magnet school for fear the paperwork would out her as an undocumented immigrant so she applied behind their back and got in.

Still, she mostly lived in the shadows until her grandmother, who visited every year from Mexico, passed
away, and she couldn’t travel to the funeral without risk of being found out and deported. It was around that time she decided to begin advocating for herself and others like her, and today, Astrid Silva is a college student working on her third degree. Are we a nation that kicks out a striving, hopeful immigrant like Astrid or are we a nation that finds a way to welcome her in? Scripture tells us that we shall not oppress a stranger, for we know the heart of a stranger.

We were strangers once, too. My fellow Americans, we are and always will be a nation of immigrants. We were strangers once, too. And whether our forebears were strangers who crossed the Atlantic, or the Pacific, or the Rio Grande, we are here only because this country welcomed them in, and taught them that to be an American is about something more than what we look like, or what our last names are, or how we worship. What makes us Americans is our shared commitment to an ideal that all of us are created equal, and all of us have the chance to make of our lives what we will.

That’s the country our parents and grandparents and generations before them built fo rus. That’s the legacy we must leave for those who are yet to come.

Thank you, God bless you, and God bless this country we love