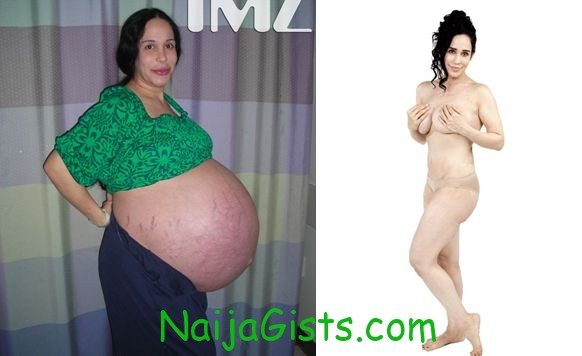 If this new picture is not a photoshop, then she must have done a good job getting her pre-baby body back. According to the single mother of 14 kids, Nadya Suleman said she does not count her calorie intake and only devote her spare time to exercise.

She became a news item in January 2009 when she was delivered of 8 babies without any means to support herself and the new babies coupled with the four kids she already had.

Nadya claimed she has been celibate for 13 years and that all of her children were all conceived through a sperm donor as she simply has no time for a man.

Talking about how she was able to regain her pre-baby figure, she said: “I just pinged back into shape like a rubber band after the kids, I don’t know how I did it. I eat like a horse, don’t count calories and have never owned a set of scales.

I gained an entire human when I was pregnant with the octuplets, going from 10st to over 19st, but two months later, I was a size 8 again. Now, I never weigh myself.”(culled from gistxpress)