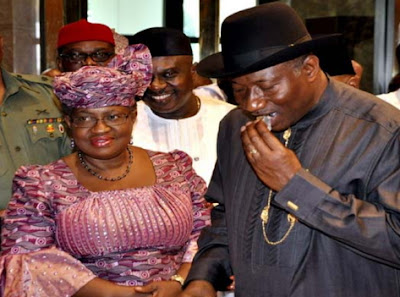 Former Finance Minister, Dr Ngozi Iweala has blamed the immediate past President of Nigeria, GEJ for the current economic challenges Nigeria is facing.

During Obasanjo’s era, she said the government was able to save $22 billion and that this saved the country in 2008 during the global economic meltdown.

Okonjo-Iweala, while appealing to the World Bank and IMF to encourage a saving culture among countries of the world, added: “we tried it in Nigeria, we put in an oil price based fiscal rule in 2004 and it worked very well.

See excerpts of her speech

“We saved $22 billion because the political will to do it was there. And when the 2008 /2009 crisis came, we were able to draw on those savings precisely to issue about a 5 percent of GDP fiscal stimulus to the economy and we never had to come to the bank or the fund.
“This time around and this is the key now, you need not only need to have the instrument but you also need the political will.

“In my second time as a finance minister, from 2011 to 2015, we had the instrument, we had the means, we had done it before, but zero political will.

“So we were not able to save when we should have. That is why you find that Nigeria is now in the situation it is in. Along with so many other countries.”
Continuing, she urged African countries to build resilience and encourage manufacturing to boost their economy.

“I do not believe that we can be resilient, except if we can encourage manufacturing even on the goods we consume, services, entertainment industry, agriculture.
“I think these are the kinds of questions that policy makers struggle with on a daily basis and that is what we are going to answer to get resilience.

“If we don’t get these mechanisms, we politicise them, find ways to transform the base of the economy and create jobs including in manufacturing, I believe we are going to go into this looming deceleration that is being talked about,”.

Where is GEJ in all of these??? The Oga seems to have varnished into thin air.