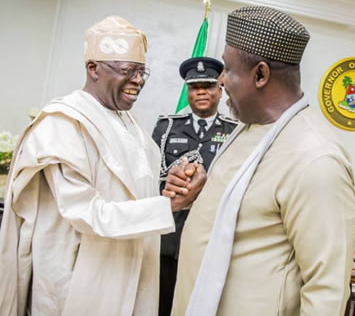 A group under the umbrella of FOBAT (Friends Of Bola Ahmed Tinubu) has come after Governor Okorocha for insulting APC leader Bola Tinubu days after he told the former Lagos governor that he was “crying more than the bereaved”.

FOBAT Chairman Ayodele Fadeyi in his chat with reporters yesterday said Okorocha should be diplomatic in his utterances.

“That was a very rude statement. He was not talking about a non-entity, he was talking about the national leader of the ruling political party, his own party. A man that commands over 20 million followers across the country. ”

“It is too late for anyone to climb on Asiwaju’s back unless you want to break it. Those of us who know his worth will never allow that to happen’’.

Hon. Fadeyi is a former member of Lagos State House of Assembly.

Continue Reading
You may also like...
Related Topics:insult, Okorocha, tinubu