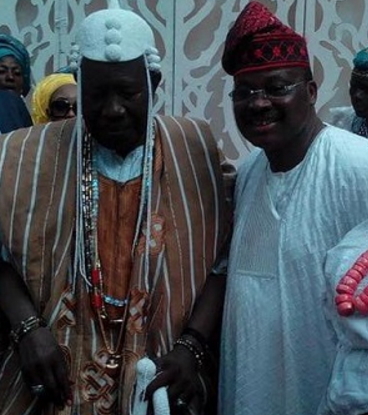 Oba Saliu Adetunji, the Olubadan of Ibadan has dragged Oyo State Governor Isiaka Abiola Ajimobi and 23 other kingmakers to court for crowning 21 kings in the ancient city on Sunday the 27th of August 2017.

Also joined in the suit are: the Attorney General and Commissioner for Justice, Commissioner for Local Government and Chieftaincy Matters, the eight high chiefs who were elevated to kings as well as the baales who were conferred with kingship status.

Besides the monarch’s suit, former Governor Rashidi Ladoja, Abdul Jelil Karimu, among others, have also challenged the legality of the coronation in court.

In the suit, which was filed at the High Court of Justice of Oyo State and dated September 19, the Olubadan is claiming that the governor violated the Chiefs Laws Cap 28 and that Ajimobi does not possess the power and authority to confer anybody the right to wear a beaded crown and coronet.

The monarch is claiming that the crowing of the 21 kings is illegal and void, since the governor did not consult with the Oyo State Council of Obas and Chiefs before taking the decision.

He is seeking an order setting aside the Gazette 14 and 15 of Volume 42 of August 23 and 24, 2017, made by the governor and which conferred the right to wear crown and coronet on the elevated high chiefs and baales.

The Olubadan said the governor’s action violated provisions of the CAP 28 of the Chiefs Laws of the state.

The monarch prays the court to set aside the installation of the new kings.

One of the representatives of the king, Abiodun Abdu-raheem, told reporters that his client perused sections of the state’s Chiefs Laws to challenge the defendants, adding that the governor did not fulfil the process prescribed by the law before embarking on the review of the Olubadan Chieftaincy Declaration of 1959.

“The governor exercised his power to elevate chiefs to kings, acting under the provision of Section 28 (1), Cap 28 of the Chiefs Laws of Oyo State.

“The Olubadan is contending the fact that before you can exercise any power under the section of the Chiefs Law, you must, as a matter of necessity, consult with the Oyo State Council of Chiefs and Obas.

“As far as the monarch is concerned, the council has not been holding meetings, by virtue of the directive of the governor in 2011. Since the council is not sitting, the governor could not have consulted with it before going on to carry out the action that led to the crowning of the kings.

“There is no provision that says that the governor can waive consultation with the council if it is not sitting. The law is clear on this matter. As it is today, the Olubadan of Ibadan is the chairman of that council, even though the Alaafin of Oyo, Oba Lamidi Adeyemi, is contending that in court.

“The issue of amending chieftaincy declaration of the Olubadan can only be done after certain requirements are fulfilled. The law says there must be a chieftaincy committee to be set up by the governor before such a thing can be done. But such a committee did not exist. The law says such a committee must have a recognised chief as the chairman and other chiefs as members. We want the court to determine if the committee set up by the governor had a recognised chief as its chairman and if the members were chiefs.”

Also, the Olubadan said Ajimobi would not contemplate removing him because of his opposition to the review.

The monarch spoke yesterday while hosting Senator Olufemi Lanlehin at his palace.

Lanlehin, who is a lawyer, said the review of the declaration by the governor was illegal.

He added that the outcry against it showed that Ibadan residents did not want the review.

“What the Olubadan is going through is not for himself or members of his family. It is on behalf of Ibadan at home and in the Diaspora.

“Olubadan is the custodian of a system that is the envy of all and sundry. Some of us have travelled all over the world and we know how very well they talk about the system in Ibadan. Not only am I a witness to this system, not only have I read about it, I am also a participant because my late father was the Osi Balogun of Ibadan land. I saw the peaceful, rancour-free and non-violent way the system has been operated for years and it has worked for us.

“So, for anybody to want to change it or thwart or make it retrogressive will not be acceptable. In any event, the law does not support the manner of change, either by way of the process or the result…”