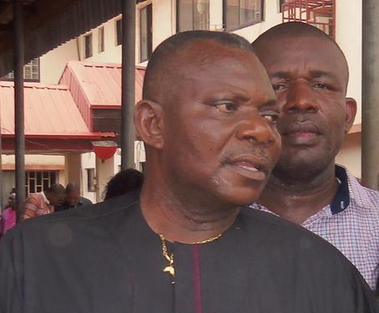 The judge also ordered the cancellation of the certificate of return issued him (Idu) by the Independent National Electoral Commission (INEC).

Justice Ademola’s orders were on a judgment in a suit by Lynda Chuba-Okadigbo, who challenged the decision of the party to substitute her name, already accepted by the party’s National Working Committee (NWC), with that of Idu.

Chuba-Ikpeazu had filed the suit on March 18, 2015, seeking among others to set aside the party’s decision.
The PDP, INEC, the National Working Committee of the PDP and Idu were the defendants in the suit. But INEC did not file any defence in the suit.

Justice Ademola held that the substitution of Chuba-Ikpeazu was wrong because it did not confirm with the requirement under the law.
He held that legitimate substitution can only occur where the original candidate voluntarily withdraws or where he/she dies.

He ordered the Speaker and the Clerk of the National Assembly to swear in Chuba-Ikpeazu as replacement for Idu immediately.

He dismissed the contention of the Idu’s lawyer, Alex Izinyon (SAN) that court had no jurisdiction over the case since it was a pre-election matter that could only be entertained by a state High Court.
Justice Ademola granted four ancillary orders “to meet the justice of the case and give effect to the court’s judgment.

“The plaintiff, Honourable Lynda Chuba-Ikpeazu, is hereby declared as the 1st defendant’s (PDP’s) candidate for the House of Representatives with regard to the Onitsha North/South Federal Constituency.
“It is also declared that the plaintiff, Honourable Lynda Chuba-Ikpeazu, is the honourable member representing Onitsha North/South Federal Constituency in the Federal House of Representatives for this session.

“The 4th defendant, Godwin Emeka Idu, is ordered to vacate that seat in the Federal House of Representatives whilst the certificate of return issued to him is hereby cancelled.
“The 2nd defendant, INEC, is hereby ordered to issue certificate of return to Honourable the rightful member representing Onitsha North/South in the House of Representatives.