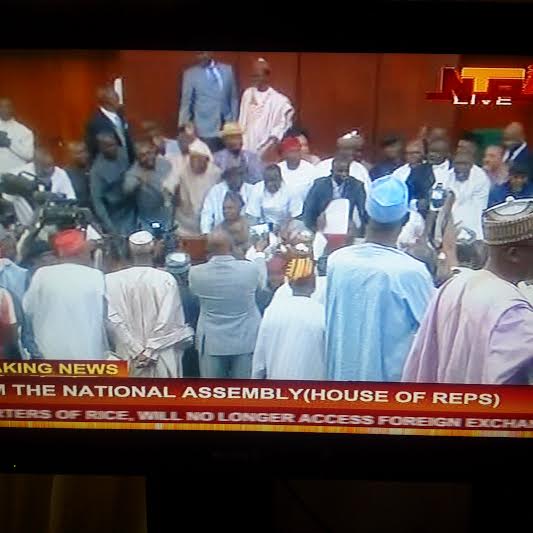 The Peoples Democratic Party (PDP) has condemned Thursday’s fracas in the chamber of the House of Representatives, describing it as a show of shame and national embarrassment.

The party said the development, which involved lawmakers of the All Progressives Congress (APC) has called to question the commitment of President Muhammadu Buhari and the APC to democracy, unity and the stability of the country.

According to the PDP, the row was a direct consequence of President Buhari’s lack of democratic credentials to rein in his party to respect the independence and sanctity of the legislative arm of government, as enshrined in the nation’s constitution.

A statement on Thursday by the PDP National Publicity Secretary, Chief Olisa Metuh said “the barbaric attempt to physically assault a duly elected Speaker and seize the mace, the authority of the House, was a direct attack on the Nigerian parliament which embodies the supremacy of the people and our freedom as a democratic nation”.

The party said what Nigerians witnessed in the House on Thursday clearly underscored the fact that the APC has exhausted its excuses and has now imported its internal contradictions into an independent arm of government as a way to further cover its lack of ideas for governance.

The PDP said intelligence available to it showed that the brawling APC lawmakers “ostensibly acted on instructions from the Presidency”, adding that it was an obvious indication that President Buhari was largely an interested party whose involvement is beyond mere body language.

The statement also added that the dishonourable conduct by the APC lawmakers was an act from a script and that it did not come to it as a surprise, “given that they are bred and nurtured under a political platform that lacks discipline and thrives on violence as an unwritten manifesto”

“We state unequivocally that the onus lies on President Buhari to ensure that all democratic institutions are harnessed for effectiveness, a responsibility he has apparently abdicated by allowing his personal interest to instigate division in the parliament, a tendency that poses great threat to the survival of our democracy and the stability of the nation,” the PDP said.

The PDP noted that the continued confusion in the APC-led government was a confirmation of its earlier stand that the APC lacked the capacity and democratic discipline to effectively steer the ship of nation and face the challenges of governance at the centre.
“If a party that has since March 28, 2015 when it got its victory, about 90 days ago, cannot resolve a basic issue of selecting its leadership in the National Assembly, clearly, their competence for national governance comes to question,” the PDP stated.

The PDP however, applauded Speaker Yakubu Dogara for his comportment, especially his statesmanly remarks after the unfortunate incident and urged him to continue to display maturity and not yield any ground in his duties to protect the independence of the legislature.

Finally, the PDP commended all its members (past and present) in the House of Representatives for what it described as “their maturity and dignifying conduct” in line with the ideals of its founding fathers on democracy built on peace and unity.