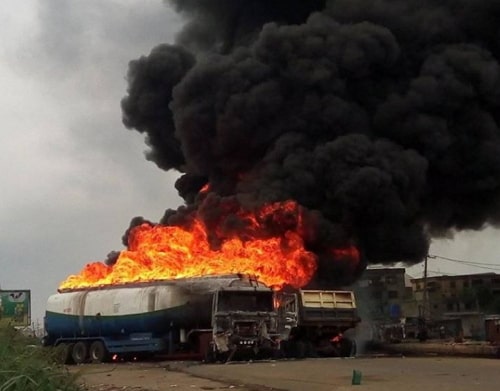 Check out the scene of a tanker explosion in Aba Abia state today.

According to eyewitnesses, this happened at Ariaria junction in the capital city of Abia.

Road users and residents scampered for safety as the tanker carrying 33,000 liters of diesel exploded on the Enugu-Port Harcourt Expressway in the early hours of today Thursday the 30th of April 2020. 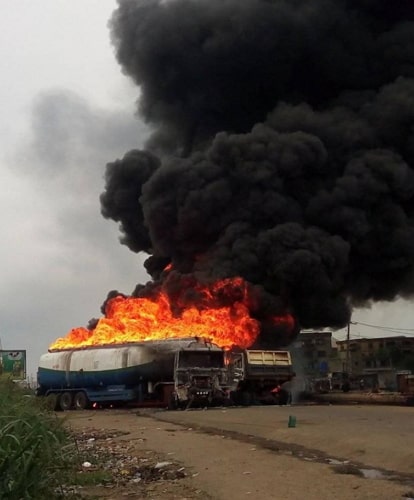 Here is what a witness told The Nation about the cause of the explosion:

“Two cars were coming from the opposite direction because they were using one lane.”

“The Ariaria junction of the Enugu-Port Harcourt Expressway is bad. But the drivers in an attempt to drag who will stop for each other clashed.

“They didn’t have head-on-collision. What happened is that part of the trailer hit the other truck, causing the content to spill as a result of the impact of the clash.

“The weather is already hot and when the body of the two trucks clashed, it sparked light and when the diesel spilled, it ignited fire which resulted to the inferno.

“The truth is that the men of the fire service were not able to do much as the flame was already too much by the time they came and while they were going, Aba residents started throwing stones at them.

“I think that it was as a result of accumulated anger that caused people to attack fire servicemen invited to the scene.

“Like I said, it was not the fault of the firemen. Their water finished, maybe, they were not expecting the kind of fire that they met at the scene.”

Here is what the fire official said after they fled the scene of the explosion over attack from the crowd.

“We got a call from one Mr. Osondu that a tanker was on fire at Ariaria junction.

“We hurriedly moved our truck to the scene. We went there with Chemical foam (foam compound used to extinguish class B fire).

“We went there with one of the trucks with 1000 gallons of 60, 000 liters of water. We tried the much we could to ensure that the fire didn’t spread to other parts of the area.

“Our water finished in the process and while we were about going back to refill, we met an angry mob. The environment was already charged but before we know what was happening, they had already started hauling stones at us including other dangerous materials.

“It was at that point that we started our car forcing our way through the crowd as they were aiming to wound the personnel.

“In an attempt to flee from the rampaging crowd, our car brake system failed, but because it is now a matter of life and death, we continued and in the process, damaging two keke and a bus.

“It was hell trying to bring the car to a halt when we entered here but through the efforts of our personnel and that of the driver and others were able to bring it to a halt.

“We would have gone with the other vehicle that contains 25, 000 gallons but because the rotor is not good, we had to go with the one available.

“If we had gone with the bigger truck, we should be able to quench the fire in about 30 mins.” 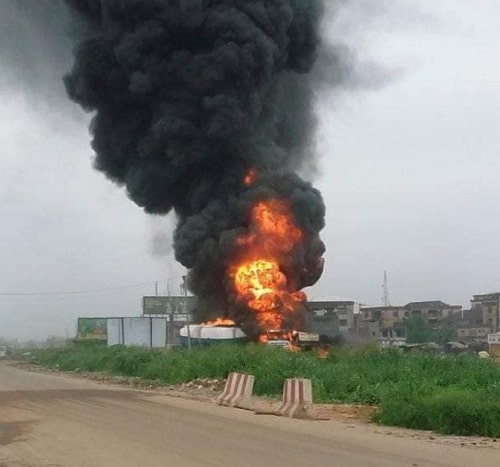 3 Pastors Arrested For Preaching With Megaphones In Ado Ekiti
Beware Of Toxic And Jealous People!!!