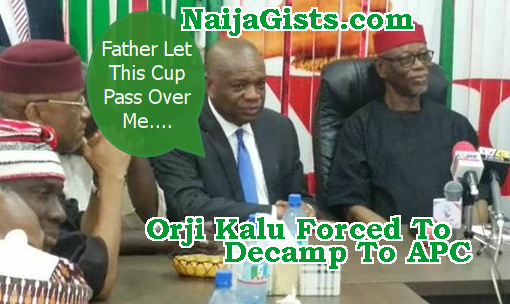 In a smart ploy to escape the long arm of justice, former Abia Governor, Dr Orji Uzor Kalu has dumped his party for the leading party.

Kalu who was the founder of PPA (Progressives People Alliance) disclosed his defection in a phone interview today.

The official defection ‘ceremony’ took place at the All Progressives Congress party Headquarters in Abuja today.

Kalu currently has a 34-count money laundering case at the Federal High Court in Lagos.

He was alleged to have committed the offence between August 2001 and October 2005.

He allegedly used his company to launder N200million stolen from Abia State Government into his FCMB bank account.

His case has been adjourned to December 12 and 13.

Critics believe he cunningly decamped to APC to get his case thrown out of court.

Na Naija we dey where everything is possible as long as you know some ‘Ogas on top’.  We dey look.

Photo: Saraki Deputy Ike Ekweremadu’s Occultic Handshake Everyone Is Talking About
How US Democrats Who Refused To Vote For Hillary Clinton Gave Trump A Free Ride To The White House