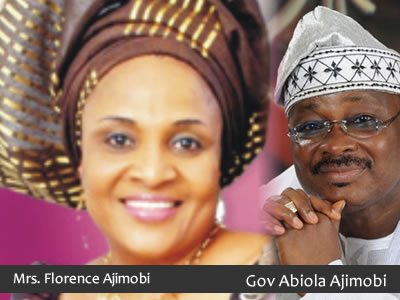 Since the news of Florence Ajimobi, Oyo State Governor’s wife arrest leaked yesterday through a reliable source in the UK, different news have started circulating. naijagists.com

Several Naija bloggers who didn’t do their research well stated she was not arrested without facts.

To set the record straight, Mrs Florence Ajimobi, the wife of Governor Ajimobi was arrested in the UK few days ago after she was caught with foreign currencies (400,000 british pounds and an unspecified amount of US dollars), a money laundering case.

Unlike Nigeria, in developed countries, you’re not allowed to carry such huge stash of money since you might be considered a subject of fraud.

Her arrest wasn’t the type where you’re handcuffed or whatever however, she was called for an investigation and detained.

The result of the investigation wasn’t revealed to us and that is why she is still in the UK to clear her case.

We learnt she was detained briefly before her husband’s brief visit to the UK to secure her release.

PMNews, the most reliable news source in Nigeria confirmed with London Met Police yesterday before publishing the news of her arrest and here is a report from them.

The Met confirmation came this afternoon following an enquiry by P.M.NEWS on the story making the rounds that Mrs. Ajimobi was arrested in London, with the sum of 400,000 pounds and thousands of US dollars, valued at N500million.

The Met simply said ‘Yes’ to our question, seeking confirmation about the arrest.

However, the organization declined to give further information about the matter, citing a UK law.

“I am sorry, we are unable to disclose any information to you under the Data Protection Act,” an officer in the MET Lambeth Office responded.

Few hours after the news leaked, Governor Ajimobi sued PM news and another news organization for leaking his wife secret.

That’s no news as this is not the first time these organizations are being sued for leaking out corrupt Nigerian politicians secrets.

Let’s get our facts right guys even if a thief is caught red-handed, he or she will deny being a thief.

Nigerian politicians irregardless of their Political party affiliations are corrupt bunch of thieves.

Former Nigerian Governors including James Ibori of Delta State, Bayelsa governor Diepreye Alamieyeseigha and several others who were arrested in the UK for corruption and money laundering indicate clearly that corruption is an epidemic in Nigeria today.

May God deliver us from the hands of these taskmasters who instead of using Nigeria’s wealth to enrich her citizens took it upon themselves to embezzle it by enriching themselves.