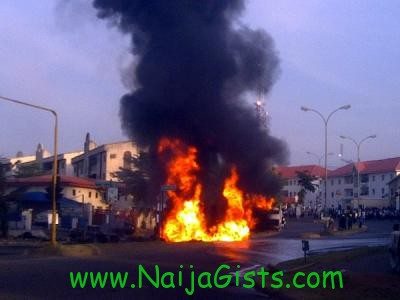 However, the tanker driver’s act of courage saved not only the filling but the shopping malls beside the filling station.

According to the tanker driver he was discharging fuel at the third underground tank when he noticed the fire, he manoeuvred the tanker onto Adetokunbo Ademola Road to avoid the further destruction of life and property.

The incident caused panic amongst several residents who thought it was a bomb explosion.

According to an eyewitness, minutes after the explosion, people started running out of their offices and residences as panic and distress calls went round the city with a false message of a bomb explosion.

Usman Kadiri, who was on his way home, said he lost some of his valuables as he ran for his life.

“I was in a cab with other passengers heading to Federal Housing when we heard a loud sound, we saw people running and they said it was a bomb and we struggled out of the car and ran too. When we eventually stopped at a point, I discovered I had lost my phone and wrist watch,” he said.

Another resident, Blessing Ochidi, was on her way to Wuse market when her mother called her to return immediately because she had just heard that there was a bomb blast at the Central area.

“Everybody in the bus with me came down as some others were calling their own people to either confirm the news or inform them of the incidence,” she added.

Bystanders at the scene of the explosion were unanimous in their condemnation of the poor response to emergency services in the city, citing the fact that the first ambulance arrived 45 minutes after the incident occurred and the four fire trucks that came did not have the capacity to fight the fire for more than two hours.

AlKasim, a youth activist, works for the BBC World Service and is based in Abuja.