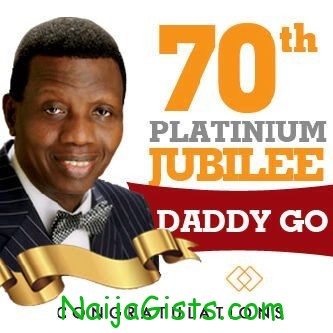 NaijaGists.com and friends are wishing The General Overseer of The Redeemed Christian Church of God, RCCG , Pastor Enoch Adejare Adeboye a very happy birthday as he turns 70 today. naijagists.com

Daddy GO as is fondly called has been voted by Times Magazine as one of the Most Influential Personalities worldwide.

The humble Man of God has huged members of RCCG worldwide to refrain from elaborate celebrations.

Pastor Enoch Adejare Adeboye was born to Papa Moses and Mama Esther Adeboye on 2 March 1942 in Ifewara, Atakumosa West Local Government, Osun State. He had both his elementary and secondary education at Ilesa, Osun State.

He worked briefly before proceeding to the University of Nigeria, Nsukka, UNN, where he read Mathematics.

Due to the Nigerian civil war that started in 1967, he could not complete his university education at UNN. He later relocated to University of Ife, now Obafemi Awolowo University, where he bagged his Bachelor degree in Mathematics.

He had his doctorate degree at the University of Lagos, Akoka, Lagos.

He joined the Redeemed Christian Church of God in 1973 and rose to become the General Overseer on 21 January 1981.