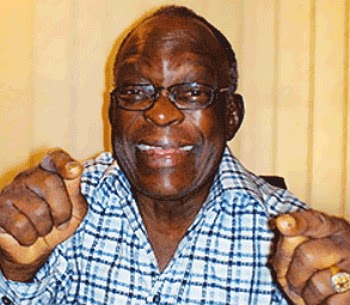 How would you assess Goodluck Jonathan’s Presidency? His supporters are of the opinion that he has done necessary spade works of which he would require a second term to see his projects through?

Whatever he and his deceiving supporters may claim as achievements, which of course, only they and no one else have been able to see, has been polluted with crass impunity, lawlessness and irresponsibility. Irresponsibility in every facet of national life. Insecurity, poverty, squalor, misery, terrorism, rape, Boko Haram hold sway; the unsolved question of the Chibok girls is there. Jonathan himself is confused; he lacks vision; he is incompetent, and clearly not cut out for national leadership. No wonder that the ship of state is in the labyrinth. Nothing in the horizon gives cause for cheers. Never in the annals of Nigerian history, have things been so bleak. Everywhere, its gloom and darkness expressly written in the horizon. Imagine for instance, the ugly situation in which millions of Federal Government workers had to celebrate the New Year and Christmas with arrears of salaries accruable to them, yet unpaid. It’s as bad as that.

How would you appraise Buhari’s election as APC Presidential Flag bearer?

It’s science that teaches us the discipline of relying on empirical evidence, to arrive at specific truth. If the universally accepted primacy of empirical evidence is anything to go by, then it becomes logical to express that Buhari’s truncated regime bears very loud testimony of his outstanding achievements, and the miracle he is capable of achieving. If you look back at that period of his regime, it clearly tells you that Buhari has the answer to the numerous cancerous problems of the Nigerian polity.

Do you think he is the best the APC could offer?

If he is not, then show me a second Buhari not only in APC, but in Nigeria, as a whole.

What are Buhari’s chances of defeating the PDP at the next presidential polls?

His chances are very bright. Nigerians are already overburdened with fraud and corruption. These two elements are the major cancerous ailments ravaging the moral fabrics of the nation, and Buhari is clearly more than capable. He undoubtedly has an answer, because he epitomizes courage, dignity, humility, honesty and integrity, the drive, passion and the will power. These qualities hold out the keys to solving the present seemingly intractable problems besetting the nation.

How can the opposition surmount the collaboration of INEC and the Jonathan-led Federal Government in the election?

The only way Buhari can lose is through fraud and rigging, and I know that Nigerian politics and elections have always been polluted by shameless and conscienceless rigging. But this time around, nobody will rig and get away with it. The people are more than ever vigilant – with zero tolerance for rigging. Anybody who rigs can only do so at his own peril. They will surely never get away with it; because the average Nigerian is tired. He craves desperately for a change.

What they are doing is campaign by bribery and corruption. They are offering all kinds of things to Nigerians, whom they deliberately impoverished; but the impoverished Nigerians know better than the past. My advice to them is to accept whatever money they are offered. Yes because it is their stolen money. But they shouldn’t vote for them.

If Jonathan wins, will the heavens fall? After all, Abiola was killed and June was 12 truncated, and nothing happened…

It’s not going to be the same this time around. I know Jonathan and PDP will not win. The miracle of Buhari and Osinbajo is such that head or tail, whatever Nigerians need to move forward, you find it in two of them. This marriage which I regard as Divine, has set in commotion the powerhouse of riggers. I repeat again, any attempt to rig, will incur the wrath of the people. The God of vengeance is angry. He is ready to visit the retributive anger of June 12 annulment on any rigger. Anyone who attempts to rig this time around, will incur fierce divine wrath.

Do you see Buhari justifying the expectation of the Messiah that people say he is, if he becomes President? Do you see him retaining the same drive and dynamism of old and even his trademark integrity?

Now come to think of it, this is a man who had served as ex-military governor, and a federal minister; not just a minister, but minister of petroleum for that matter; after which he later served as Head of State of Nigeria, and also Chairman PTF. He had all the opportunities to enrich himself yet he refused to be tempted. We all know that today, he has just one house and he is just barely comfortable. He has the opportunity to utilize his clout to garner multi-billion naira worth of contracts, like his colleagues; yet he is not doing so. What else does that kind of person wish to live for, if not for posterity? It’s too late in the day for Buhari to change. I bet, he is the only one known today in Nigerian politics, who not only has the moral courage to tackle corruption, but also the will power to do so, and also take Nigeria to the promised land.

What advice have you for Jega?

My advice to Jega is to prove wrong those who are already convinced that he will readily submit himself as a willing tool and accomplice with the powers that be, in their agenda to remain in power at all costs. Jega as a Professor has the opportunity to write his name in gold, as an honest man of dignity, integrity and courage. I advise him not to miss this opportunity because Nigeria of tomorrow will surely be bigger than the past.

And also for Emirs, Obas, Obis and traditional rulers as a whole. I heard that Jonathan has already embarked on a visit to traditional rulers, emirs, Obas and the like. My advice to our traditional rulers is to beware; because their conscience will judge them if for filthy lucre, they subject those under them to another four years of pain, hardship and hopelessness in a Nigeria that is so blessed abundantly. As the custodian of the culture and morals of their people, they should sustain their relevance, by leading their subjects aright.

Your advice to religious leaders

My advice to religious leaders is to search their conscience and remind themselves of the popular biblical word of wisdom that when the righteous ruleth, the people rejoice. And what better epitome of righteous rulers do you expect to have, than the combination of Buhari and Osinbajo. They should understand that when they are voting, the omnipotent Jehovah is watching them. Nigerians have suffered so much; that is why God has put forward the combination of Buhari and Osinbajo. As spiritual leaders with the gift of discernment, they should be wise enough to understand that the emergence of Buhari and Osinbajo, is an answer to the prayers of the teeming mass of suffering Nigerians.