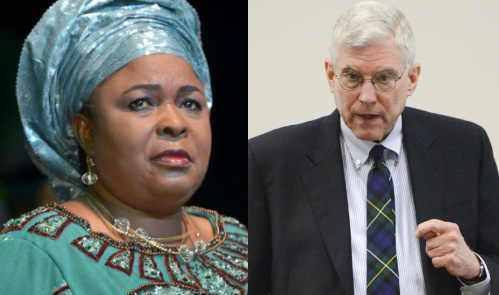 Oct 8, 2017 – How Can Patience Jonathan Managed To Accumulate $35Million In A Poor Country Like Nigeria – Ex-US Ambassador John Campbell Asks

Former US Ambassador to Nigeria, John Campbell, has described former President Goodluck Jonathan’s wife, Patience, as being arrogant and flamboyant when she was Nigeria’s first lady.

In a piece he wrote on Friday, ‘Nigerian President Buhari’s Sisyphean Efforts’, and posted on Council on Foreign Relations’ website, Campbell also wondered how Jonathan’s wife became wealthy having spent most of her life as a civil servant.

The ex-US envoy stated, “Patience Jonathan as the first lady was flamboyant, arrogant, and widely disliked. She has yet to be convicted of a crime. However, it is curious how a person who spent most of her career in public service could accumulate an acknowledged $35 million in a poor country.”