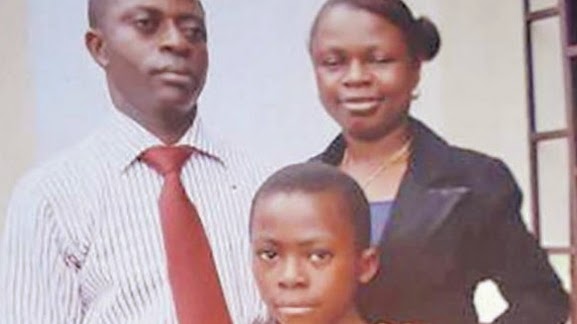 Others who were found dead with the blind prophet in the apart­ment include his wife, Comfort Ihezukwu who was in her thirties, his 11-year-old son, Emmanuel Godwin Onyenonachi, his daugh­ter, Miracle Onyenonachi Ihezuk­wu, 13 years and his 50-year-old landlady, Mrs Hannah Okpara. Also, three fowls were found dead close to the bathroom of the four-bedroom bungalow.

A very dependable family source who spoke with Sunday Sun on condition of anonymity said that the five corpses were discovered in different places.

His words: “We were called up at the early hours of Sunday, April 19, 2015 and when we got to Umu­osu Afugiri, where they lived be­hind the Methodist Church, we saw hundreds of sympathizers, some crying and others just agonising over the unfortunate incident. We also met policemen from Afugiri Division.

“When we inquired from the police, they told us that they met the generating set on, on arrival. The generator, we were told, was bought three days before their deaths. The generator was found along the passage, inside the bunga­low and the policemen told us that they were the ones that put it off. The police said that the victims probably died from excessive inhaling of carbon monoxide pro­duced by the generator. The man was the only surviving child of his parents, late Mr and Mrs Ihezukwu Agwu. So far, we are his only direct relations, running around for the burial.”

According to our source, a cur­sory look around the apartment in­dicated that the victims had eaten a meal of rice before going to bed on the fateful night. It was also learnt that the lady was a regular visitor to the home of the late prophet, as she usually join the family for all-night prayer sessions. This probably explained her presence in the house on the ill-fated night.

When the policemen arrived the scene, Sunday Sun was told, they broke the door to the apartment open and met the generator still running and promptly switched it off. Going back into the past, he provided a profile of the late prophet, who he said, had lived in Kaduna for 20 years right from 1990, but relocated from there in 2012 to Nkwoegwu to re-start the ministry which he established while in the northern part of the country.

He disclosed that he was still young when the late prophet left their community for Kaduna, re­vealing that the victim was not born blind. “The blindness developed af­ter the death of his father in August 2002. After a year or two, he devel­oped sight problems, which led to this blindness. When his father died in 2002, he did not come home for the funeral, even though the mother had been dead long before then. He married before going blind.”

Sunday Sun checks revealed that he ran a flourishing ministry that conducted prayer sessions for people. Two years ago, he lived at Nkwoegwu, close to where his ministry was located. Our source disclosed that the last time he visit­ed the late prophet was in Novem­ber 2014.

“After then, I never saw him until this incident happened and we were invited to come to Umuosu. The problem we are having now is how to bury all of them because there is nobody that is directly re­lated to him except we who are his cousins and we are not financially buoyant to take on the responsi­bility of these burials. That is why we are appealing to Abia state government and other good spirited people to come to our aid. It has become a big problem for us now. Burying the five persons at a time is not an easy task for us. Our concern now is to get the case out from the police and make arrangements for their burial,” the source said.