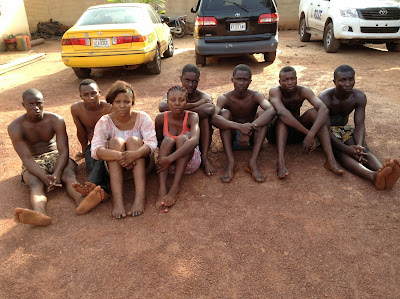 A notorious and deadly cultist who have been terrorising good people of Ibagwa Nike of Abakpa and its environs identified as Abuchi Ngwu Matthew A.K.A GOVERNMENT and the leader of JVC Cult group of BAGGER CONFRATERNITY have been nabbed by the eagle eyed operatives of the Special Anti Robbery Squad of the Enugu state police command on 17/5/15.

He was arrested based on tip off received by the operatives that himself and other members of the gang were taking refuge in an uncompleted building at Ibagwa Nike from where they were planning on how to go on their unlawful execution of their victim whom they have earmarked to wreak havoc on.

Some of the arrested members of the gang gave their names as Ifeanyi Emeka,Chinonso Ugwu AKA Labista, Darlington Chukwuebuka, Nnaji Kelechi, Ebuka Nnaji AKA Shawolin, Maryanne Arum and Uzor MaryJane.

It was further gathered that the two female suspects usually cook for the cultist any time they want to embark on execution and importantly, lures their victim out to area of execution. The two ladies told reporters that they usually cook for the group as two of the cult men are their friends just as they have given more insight to the nefarious activities of the group within Abakpa and its environs. They have begging for forgiveness.

According to them, “we never knew how the operatives rounded us up as were eating our food at an

uncompleted building stated Labista known as Chinonso Ugwu”.
It could be recalled that the state command of the Nigeria Police Force through its operatives has been on regular raids of some places containing cult members.
Suspects are now helping the police in their investigations.
EBERE AMARAIZU
PPRO, ENUGU POLICE COMMAND