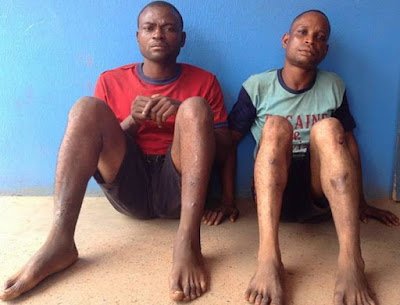 2 homosexuals were rescued in Enugu state yesterday the moment an angry mob was about setting them ablaze over homosexual activities.

The suspects identified as 32-year-old Orji Odinaka and 22-year-old Nonso Ejimene were caught in the act with two young boys on Sunday July 17 2016.

They were stripped naked and paraded round town but while the mob was about placing tyre filled with petrol on their neck, police rescued them.

Orji told police his wife left him over his addiction to illicit acts with fellow men while his partner in crime, Nonso Ejimene blamed the devil for corrupting his mind.