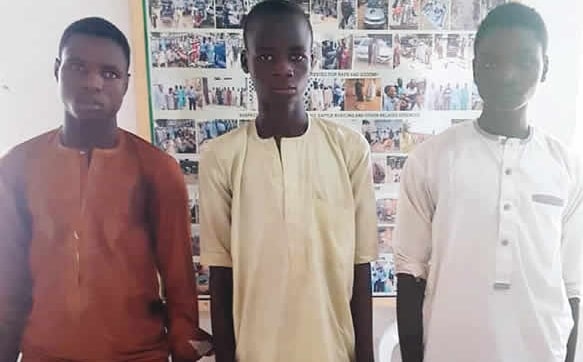 Police in Kano have arrested three suspected kidnappers of a four-year-old boy, who demanded a ransom of N100,000.

According to a statement issued by the Command’s spokesman, Musa Majiya, the police commenced the search for the missing boy on Friday immediately they received the report of his abduction.

The police explained that one Mustapha Muhd of Goron Dutse Quarters, Kano reported that his four-year-old son, Al-Amin Mustapha, had suddenly disappeared.

Majiya said an unknown person subsequently contacted the father of the kidnapped boy on his mobile telephone with the number 08069777966 and demanded a ransom of N100,000 before the boy could be released.

“Immediately the report was received, detectives from Anti-Kidnapping Squad under the able leadership of CSP Babagana Saje were mandated by the state Commissioner of Police, Rabiu Yusuf, to not only investigate but to rescue the victim and arrest the perpetrators.

“Following the directive by the CP, an investigation commenced which led to the rescue of the victim unhurt, with no ransom paid,” the police spokesman explained.

According to him, those arrested in connection with the abduction were Idris Ibrahim, 19, of Goron Dutse Quarters; Khalid Abdul Rahman, 24, of U/Dabai Quarters; and Ahmad Usman, 20, of Aisami Quarters, Kano.

Majiya disclosed that the main suspect, Ibrahim, confessed that he lead the operation and named his accomplices.