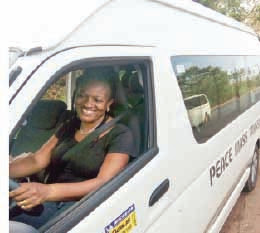 Opara in the bus

Saturday the 12th of November 2016 will remain indelible in the life of Mrs Chioma Opara, a mother of four and medical laboratory scientist at the Nnamdi Azikiwe University Teaching Hospital (NAUTH), Nnewi, Anambra State.

On that fateful day, she exhibited guts and a great act of bravery when she rescued 17 passengers on the Abuja-Okene highway, after gunmen attacked them. The gunmen, who wore army uniforms, abducted the driver of the bus belonging to Peace Mass Transit Limited, and two passengers on the front seats. All three were dragged into the bush by the hoodlums.

Opara summoned courage and took the steering. She drove the bus, popularly known as Hummer Bus all the way from Okene, in Kogi State, to Onitsha where some of the passengers disembarked, and then drove the bus to Nnewi and handed it over to the transport company.

Before boarding the bus in Abuja, she had pleaded with the staff to be allowed to seat in front as the place would give more room for her long legs, given that the journey from Abuja to Anambra State would be a long one and she needed to be comfortable. But she was told that some other person had booked the front seat and she had to settle for seat number six. Considering the eventual outcome of the trip, she would have been one of the passengers abducted by the hoodlums if she had sat in front, had it not been for divine providence.

“It was around 10:15am on our way from Abuja where some of my colleagues and I attended a training programme organized by Aids Preventive Initiative of Nigeria (APIN) in collaboration with Family Health International. Six gunmen in army uniform, wielding AK47 rifles stopped our vehicle on the highway in Okene, Kogi State. They spread themselves because some of them were some metres away from where the first two persons stopped our driver, their guns pointed at him.

“When the driver stopped, the other ones rushed to the bus. They opened the driver’s door and the front passenger door. They tried to open the central door but the door failed to open. The hoodlums wore masks.

“They took two loaves of bread on the dashboard and then dragged the driver and the two passengers at the front seat into the forest while the rest of us bowed down our heads, to avoid looking at their faces. They later came back to the bus and tried again to force the central door open but could not. They had to use the driver’s side to reach some of the passengers, collected phones, laptops, money and other valuables and entered the forest again while our faces were still facing downwards; we even said our last prayers.

“As they moved into the bush, we heard the siren of a police patrol vehicle coming towards us and we managed to beckon on the vehicle for help through the window of the bus but the patrol van did not stop.

The security men in the patrol van only shot in the air and zoomed past. One man jumped out from the bus through the window and started running down the road without knowing where he was running to.
“After a while, I raised my head from where I was and looked at the driver’s seat.

I discovered that the keys were in the ignition hole. I crawled to the seat and some passengers were shouting at me in low tone telling me not to go to the driver’s seat, saying that the gunmen would come back and finish all of us.

What came to my mind at that time was what we were taught during the national youth service programme, that we should take a bold step while in danger, either you survive or perish. And I told myself that I went for a training programme to serve my country. After praying in my heart, I started the vehicle. But it was a manual one which I drove over 15 years ago.

I picked up courage, drove the bus out of the bush path and hit the road. We saw the man who jumped out and picked him on the way.”

Opara said that they met an army checkpoint at Okpella in Edo State and narrated their ordeal to the soldiers, who promised to contact their patrol team. Next, the passengers got in touch with the Abuja office of Peace Mass Transit, which promptly reached out to security agencies and a team of armed soldiers was dispatched to search for the abducted driver and two passengers.

The search was unsuccessful. But through providential intervention, the driver and the passengers were able to escape from their abductors and returned.

Continuing the tale of guts, she said: “We made entries at a police station in Edo State and continued our journey until I drove the bus to Anambra State and arrived between 9 and 10pm because of delays on the road. The Onitsha and Nnewi passengers dropped and I proceeded to the office of Peace Mass Transit, where I handed over the vehicle to the company.”

The cleric said some passengers were still facing down when Opara drove off. He said everybody was surprised the way the woman was handling the steering as if she was a professional driver. “We were even asking her to take it easy. But she concentrated on what she was doing with every amount of perfection,” the pastor said.

Commenting on the woman’s bravery, the Executive Director, Operations and Maintenance of Peace Mass Transit Limited, Mr Chidubem Timothy who confirmed the incident to Daily Sun said the feat was amazing to everyone in the company and commended the woman for the uncommon show of courage. He mooted that the company would do something for Opara in appreciation.

A commuter who heard the incident but pleaded anonymity said it would not be enough for just the company to appreciate her. Rather, he suggested that both the federal and state governments honour Opara, saying:

“It is not easy to save the lives of 17 passengers who could as well have been abducted and possibly killed for rituals. We have heard stories of the sort, where people were abducted for ritual purposes.”