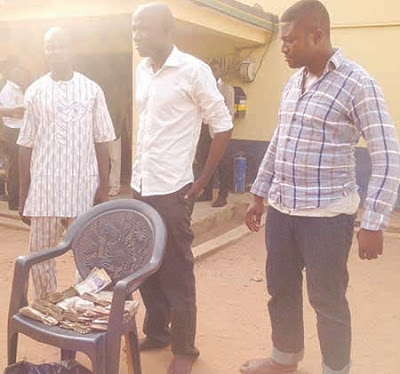 Mrs. Felicia Ahula, a mother of 7 is among the 613 Nigerians who were recently duped in Benue State by a group of suspected money doublers. They came into the state with a promise of doubling money for unsuspecting members of the public, but with the mission to rob them and disappear into thin air. 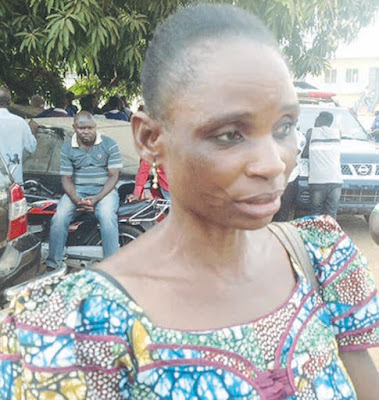 To further convince the public of the supposed genuineness of their business, the syndicate, led by one Ibrahim who claimed to be a software engineer had hired a hall in the premises of a church from where they operated.

That was until the church board, suspecting a fowl play, informed the police about the unusual activity within its premises and the eventual rounding up and arrest of the syndicate by the police.

But Ahula who lost N4,000 to the money doublers alongside hundreds of other victims had stormed the premises of the state police command from where they narrated their ordeal to Daily Sun.

According to Ahula, a petty trader and widow, she was in church that fateful evening when the money doublers came with cheering news of doubling any amount they deposit a day after. Initially, she and some members of the church were skeptical until they saw people who tried it getting back double of what they deposited the next day.

Not wanting to be left out, Ahula said many of them who didn’t participate the first day, sourced for funds and made deposits while those who deposited the previous day were being paid twice their deposits. However, luck ran out on Ahula and other victims as the syndicate were apprehended by the police following a tip-off the same day she made a deposit.

Another victim, Mr. Samuel Shiika, said on hearing from a friend about the news of money doublers in town, he quickly went to his bank and withdrew his last N20,000 and deposited same with the hope of getting back double the next day:

“That Thursday, I was in my house when a friend called to inform me that some money doublers were in town. He was so much convinced when he said he saw many people collecting back double what they deposited the previous day.

“Immediately, I went to my bank and withdrew the remaining N2000 and deposited it with the money doublers. Unfortunately, by the next day when I got there to collect my money, I was told they had been arrested by the police.”

Gbankan Donatus said he paid N10,000: “As I went to collect my money the following morning, I was told that the police arrested them the previous evening. Since then, we have been running up and down to get our money back to no avail. We don’t know what is happening.”

Mnlumun Bagu, a mother of three and food seller, said she was carried away by the fact that they operated from a church environment:

“I felt scam cannot just happen in a church environment. Most of us were lured into believing that the scheme was real because they were operating from the church plus the fact that we saw people being paid double their deposits.”

She initially deposited N2000 and got back N4000 which she reinvested in the scheme to get N8,000 the next day before bubble burst. She insisted, it was poverty, not greed that pushed her into the game:

“It was announced in church that some people were coming to empower the youths and widows and that the program was going to last four months. They told us this was the 17th state they were visiting. I initially deposited N2,000 and got back N4000 next day which I reinvested to get N8,000. We came back Friday morning and discovered they had arrested them. It was difficulty that made us do what we did.”

A widow who was a victim of the same scheme in 2013 in Jos, Plateau State, was in Makurdi when she heard of the scheme and decided to satisfy her curiosity. The woman, who gave her name as Mrs. Dauda, said she heard that an NGO was giving out cash to widows. When she got there she discovered that one of them was among those who defrauded her and her family of N2.9 million in 2013 under another name:

“As soon as I discovered this, I came to state CID for advise and discovered they were already under police detention.”

But the ringleader of the group, Ibrahim, while being paraded along with his accomplices, Atuaka and Tivkaa agreed that he operated in 2013 but was frustrated out of business by the Economic and Financial Crimes Commission (EFCC) and the police.

He insisted that he had been into empowerment programs for a long time, saying he had to sue the EFCC and the police for tying down billions of naira belonging to over 60,000 Nigerians in a bank since then.

He said after then, he was able to develop another software, which had empowered over five million Nigerians. He demanded that his phones be released to him so that he could pay those he was owing.

Tivkaa who invited Ibrahim to Makurdi said he decided to invite him to the church after he saw how he was empowering people across the country. Tivkaa, a member of the church insisted that the essence of the money doubling was to empower people. He maintained that they had not defaulted in anyway besides the fact that they did not take a formal permission from the police before commencing the program:

“I invited him (Ibrahim) to the church when I saw what he is doing empowering people. The essence was to empower the people. I have been a member of the renewal since 1993. The only mistake we made was that we did not notify the police. Besides that, we have not defaulted in any arrangement they had with the people.”

Catchiest of the church (name withheld), said they came to him sometimes last year and claimed that they wanted to come and empower youths and widows and that they would be needing a lecture hall for the event. 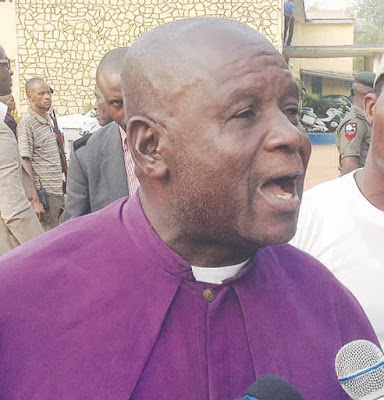 He said based on their claim, the church decided to give out the lecture hall to them free of charge but was surprised when they came and started doubling money for people:

“When I saw their activities of doubling money for people, I was no longer comfortable. So, I quickly notified the Parish Priest who asked me to inform the police immediately.”

The Commissioner of Police, Bashir Makama, said when the catchiest saw the activities of the fraudsters the first day, he became apprehensive. He came and reported the case to the police and his men immediately swung into action and got them arrested.

He disclosed that the fraudsters had collected the sum of N4.5 million from unsuspecting people before their arrest.

He said only N2.1 million was recovered and advised Nigerians not to play into the hands of fraudulent characters but should know where to invest their monies. He urged Nigerians to be wary of greed but learn to work hard to get whatever they deserve.