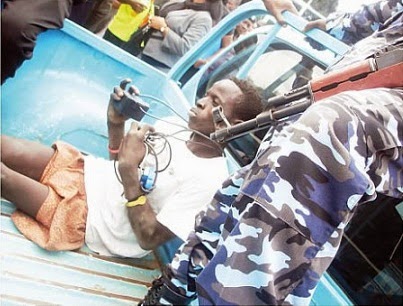 The 22-year-old physically challenged man was caught yesterday at Centrex, few distance away from the international terminal of the popular airport.

He was caught with bomb hidden in Canisters around his neck.

The man confessed that he was sent to Lagos to bomb several parts of the city by leaders of the dreaded Boko Haram sect.

He told police that himself and two other Boko Haram members were sent to MMIA, Apapa and Lagos Island to set up bombs.

“He was caught because when he tried to set off the explosives, there was a hitch. He ran back to an obscure place to check it out and fix it. His suspicious movement and the frustration evident on his face aroused the suspicion of security operatives attached to NAMA.” – said a security operative handling the investigation.

Check out another picture of the frustrated Boko Haram member minutes after he was arrested yesterday.

Thanks to God for frustrating all his effort to set off the explosive that would have killed several onlookers at the airport yesterday.

In the past Boko Haram have used female suicide bombers now they are using physically challenged people.

Who knows what next they are planning too do. We urge all citizens to be vigilant and report any strange movement in their surrounding to the police.