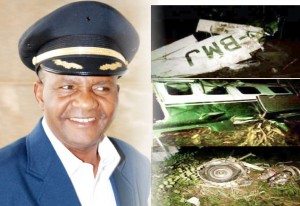 Governor Danbaba Danfulani Suntai, a trained pilot who crashed his private jet into a bush in Yola, Adamawa was said to be the pilot of the jet during the time of the plane crash. naijagists.com

According to his spokesperson, Alhassan Mijinyawa he is unconscious and receiving treatment in the hospital.

One of his aides lost his live in the tragic air crash that happened around 7:30pm last night.

Adamawa Police Commissioner, Godfrey Okeke confirmed this morning that the Governor is responding the treatment at a Specialist Hospital in Yola.

“He is alive and in stable condition. He sustained minor injuries; if he had been were an ordinary man, he would have been discharged but I learnt he would be flown abroad for further medical checkup,’’ he said.