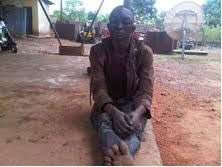 May 24, 2016 – Police Arrest Carpenter Who Allegedly Raped Teenager At Gunpoint In Enugu, Suspect Blames The Devil

Enugu Police has arrested a carpenter accused of raping a 15-year-old girl at gunpoint in Umuogoji Orba area of Udenu in Enugu on Sunday.

The suspect identified as Casmir Eze reportedly entered his victim’s compound by scaling the fence around 2:00am on Sunday.

He forced the victim to open the door at gunpoint before he pounced on her and had carnal knowledge of her.

The suspect admitted committing the offence and maintained that it was the devil that pushed him into the act.

“I did not know what came over me, although I have been targeting how to get the girl since and no way, hence I had to come through this way,’’ the suspect told police.

Continue Reading
You may also like...
Related Topics:carpenter, enugu