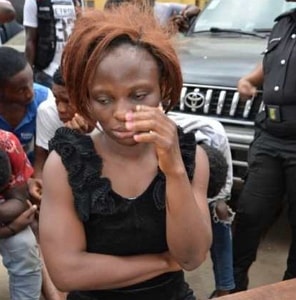 A man identified as Ibe Akachi has received hot water baptism from his enraged wife Joy Imeribe for allegedly abdicating his fatherly duties to his four children.

It was gathered that the incident occurred on May 29, at the couple’s 21, Karounmi Street, Ijesha in Lagos.

Imeribe, who was paraded Wednesday for attempted murder and domestic violence by Police Commissioner Imohimi Edgal, told reporters she acted in self defence.

The woman, who said she had lived with Akachi for 13 years despite his not paying her bride price, said: “My action was in self defence. The father of my children always beats me. Infact on one occasion, he even stabbed me with a knife on the left hand.

“What happened this time around was that he left the house without dropping money for food. I had to borrow N1000 from a neighbour to prepare food for the children.

“After preparing the food, I also borrowed another N2000 from my neighbour to buy second hand clothings from Yaba. My plan was to resell the clothes at Aswani Market so that I can get money to keep feeding the children.

“I had only returned from Yaba at about 4pm when my husband, who was already at home started asking me where I was coming from. I told him the truth but he did not believe and started beating me.

“He claimed I was a flirt and had gone to see some of my male frriends. The beating went on all night and in the morning, when I noticed he had gone into the kitchen to prepare his food, I also went there and boiled water to bath my children.

“He wanted to start beating me again and to defend myself; I carried the boiling water in a bucket and poured it on him. My husband has not been keeping up with his responsibilities as a father and man of the house. He out rightly refuses to bring money for food and upkeep.

“When I saw the injury on his body, I regretted my action. But I did it to protect myself. I had moved out of the house early this year but after much pleas from him and friends, I returned with my children to his house.

“It is about six weeks ago I came back and he started with his old ways.”

Lamenting the spate of domestic violence, Edgal emphasised the need for couple to discuss their problems and solve it without resort to violence.

He said: “Findings made so far in the matter revealed that the husband and wife had verbal disagreement, which did not go down well with the wife. She went to bed with grudges in her mind. The next morning while her husband was in the kitchen preparing breakfast, the wife, who had been seething with anger over the unsettled issue bordering on her keeping late nights, boiled a bucket of water and emptied the content on her husband’s body.

“She did not deny committing the crime, however she told the police that her husband used to beat her in the past. She would be charged to court.”