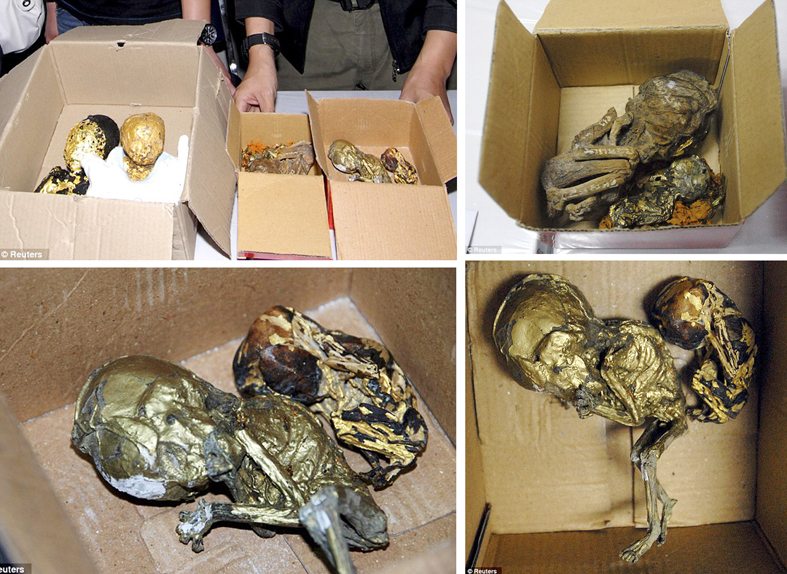 Hok Kuen Chow, a Briton born in Hong Kong of Taiwanese parents, was held in the city’s Yaowarat area after police received a tip-off.

He is suspected of trying to smuggle the foetuses – from two to seven months – back to Taiwan to sell to wealthy customers online.

Chow has reportedly admitted buying the bodies, which had been roasted dry and painted in gold leaf, for 200,000 baht (£4,040).

Back in Taiwan he could have sold them for six times that amount to rich clients who believe the foetuses will bring them good fortune. ‘The bodies are between the ages of two and seven months,’ said Wiwat Kumchumnan, of the police’s children and women protection unit.

‘Chow said he planned to sell the foetuses to clients who believe they will make them lucky and rich. ‘Some were found covered in gold leaf.’

Police said the bodies also had a variety of religious decoration and tattoos on them.

It was not clear yesterday where the bodies, which had been stored in six travel bags, came from or who had handed them over to Chow.

It is possible they had undergone the grisly Thai practice ‘Kuman Thong’, in which unwanted babies are surgically removed from their mother’s womb before being subjected to a ceremonial ritual.

Instead of being buried, the bodies are roasted dry and covered with a lacquer before being painted with gold leaf.

Chow, who was arrested on suspicion of being in possession of human remains, was staying at a hotel in a backpacker area in Bangkok when he was detained. 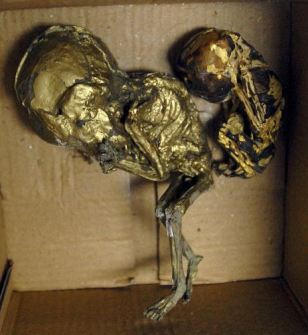 Police had received a tip-off that foetus corpses were being offered to wealthy clients through a website advertising black magic services. Black magic rituals are still practised in Thailand, where street-side fortune tellers offer ceremonies to reverse bad luck.

In November 2010, health inspectors found 2,000 foetuses on a building site by a monastery in Bangkok which had been illegally aborted.

The Foreign and Commonwealth Office yesterday confirmed it was on stand-by following the arrest.

A spokesman said: ‘We can confirm the arrest of a British national in Bangkok on May 18. ‘We stand ready to provide consular assistance.’

This is really bizarre. Lord have mercy! (Mail online)