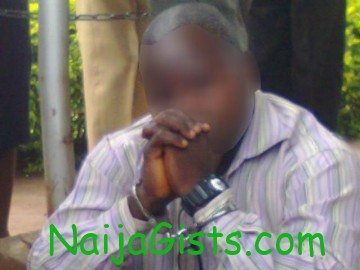 A middle age man with a mission for destruction named John has been arrested by Security agents in Abuja on Monday May 21st, 2012 during a ministerial briefing. naijagists.com

Naijagists.com learnt he was caught with 3 hand grenades and some rounds of 7.62mm ammunition at the Radio House in Abuja.

The briefings, which have been holding on a daily basis in the last two weeks, have been coordinated by the Federal Ministry of Information, as part of the preparations for May 29, celebrated annually as Democracy Day 2012.
The suspect was arrested at the screening point when security agents allegedly took notice of a bag he was carrying.

When challenged, he said he was given the bag by an unnamed woman, who asked him to deliver it to someone at the venue of the briefing.

The Chief Security Officer at Radio House, Mr. James Akindele, told reporters that the suspect was arrested at the main entrance.
Akindele said, “This afternoon, our operatives arrested a man with rounds of 7.7 mm live ammunition and three 86 hand grenades, all concealed in a polythene bag and put in a black bag.

“We have not interrogated him, we just apprehended him. What we want to do now is to hand him over to the police for further investigation and then you will all get to know more about his case.”
The suspect was later taken to the police station while proceedings at the ministerial platform continued.

This man is definitely an agent of Boko Haram.