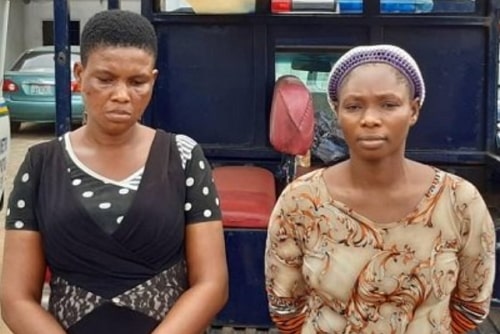 The Anambra state Police Command said they have rescued three kids from two women suspected to be child traffickers in Nkpor, Idemili North local government area of the state.

The police spokesperson, Haruna Mohammed, who confirmed this while parading the suspects in Awka, said the suspects Chisom Ani, 28 and Afamefuna Udodili, 32, were arrested by Police detectives following intelligence report.

He said, “Preliminary investigation by Police detectives attached to Otoucha Division revealed that the two children were allegedly stolen from Enuguwu Aguleri in Anambra East LGA by one Ani Chisom ‘f’ aged 28 years of Amuri in Nkanu-East LGA of Enugu State and Afamefuna Udodili ‘f aged 32 years of Orodo in Mbaitolu LGA of Imo State respectively.

“Following the public announcement by the Command on the 22/11/2019, parents of the two kids from Enugu Aguleri came and identified their children.

Mohammed said the children have since reunited with their parents, adding that the suspects would be charged after investigations were concluded.

“The Commissioner of Police John Abang urges parents and guardians to monitor their children and caution them against following strangers.

“The CP further enjoins the public to report any suspicious persons to the nearest Police Station or call Police emergency number 07039194332 for prompt action,” he added.

Continue Reading
You may also like...
Related Topics:anambra, child, traffickers