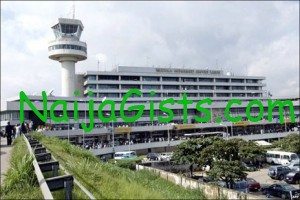 May 15, 2012 – Power Outage At Murtala Mohammed Airport: People Trapped In Elevator For 45 Minutes

The issue of unstable electricity supply in this country of Nigeria is going out of hand. naijagists.com

Murtala Muhammed International Airport, Ikeja, Lagos, was, yesterday May 14, 2012, thrown into darkness, while passengers and workers were trapped inside lifts for 45 minutes due to power outage that occurred at around 12 noon

‘The screaming of the trapped victims’…..It must have been a very uncomfortable and fearful situation for them, trapped inside a dark and stuffy elevator for as long as 45 minutes!

According to an eye- witness, those trapped in the lifts were heard screaming and kicking inside for help.

He added that the people who were trapped also tried to force the lifts open, but could not.

The screaming of the trapped victims attracted the attention of Federal Aviation Airports Authority engineers, who had to go to the sixth floor to work on the lifts before they could force them open.

The increasing occurence of power outage at the International Airport has become very embarrassing and disturbing. The Muritala Mohammed Airport, Lagos as it is does not boast of the best of facilities. Most times, the air conditioners don’t seem to be working effectively where they are working at all. People usually feel imprisoned by the heaviness in the air within the Airport.

Sometime in March, there were reports of a total blackout at the Airport lasting six hours which left passengers and other users of the place experiencing feelings of suffocation. Considering the enclosed design of the airport, any prolonged failure in power supply would be terrible for its occupants at that time.

The news report does not state whether the power was out for 45 minutes, trapping the victims inside the elevator or if the power came back earlier but the elevators didn’t respond. Whatever the situation might have been, it must have been unpleasant for the victims and embarassing for us Nigerians who get to read about such.

This is very disturbing.

If Ghana can enjoy 24-7 uninterrupted power supply, what the hell is going on in Nigeria.

God have mercy on this Naija oooooooo