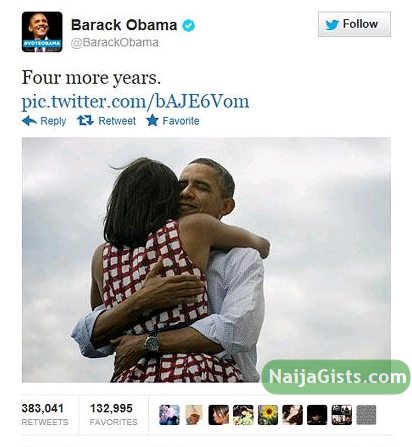 As destiny will have it, the new US president elect, Barack Obama who has broken historical records offline has done the same online. naijagists.com

Tweet messages sent out by Barack Obama to herald his re-election as President of the United States has rapidly become the most popular of all time.

The post, which simply read “Four more years” and was accompanied by a photo of Obama embracing his wife Michelle, had already been retweeted over 350,000 times just an hour after it was posted (so far 576,850).

The victory tweet surpassed the previous record held by teenage pop sensation Justin Bieber which was retweeted 223,376 times, according to The Atlantic.

Obama, whose campaign has harnessed social media extremely effectively since he became a presidential candidate in 2008, has amassed a whopping 22 million followers on Twitter.

The record-breaking proclamation of victory came towards the close of a frenetic election night on Twitter, which will likely break records for posts and activity.

However, not all of the Twitter-based news was positive. The Apprentice U.S host Donald Trump (himself, fleetingly, a republican presidential hopeful) caused a furore with a barrage of explosive tweets.

“Lets fight like hell and stop this great and disgusting injustice! The world is laughing at us,” he tweeted from his @realDonaldTrump account, which has 1.3 million followers. (Credit: TECHNORATI/DAILYPOST)