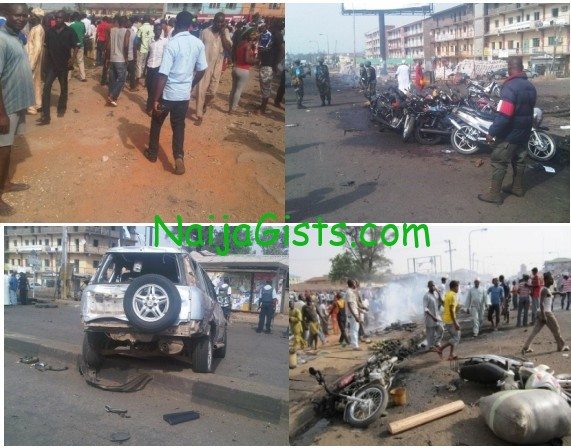 Below is Naijagists.com’s compilation of recent Boko Haram‘s suicide car bombing attacks between June 2011 to April 8, 2012 in Nigeria.

Over 38 people died in this brutal car suicide bomb attack that took place along a very busy road on Easter Sunday at ECWA church in Kaduna. Below is the raw footage video of the attack . Views discretion is advised. naijagists.com

10 people were killed when a suicide car bomb detonates outside a Catholic church in Jos on the 11th of March, 2012.

No one has claimed responsibilities yet however, Boko Haram is a usual suspect. naijagists.com

February 26, 2012 – Suicide Car Bombing Outside Another Church in Jos

3 people were killed outside another church in Jos. Boko Haram has claimed responsibility for this attack

This happened at a Christ Embassy Church in Suleja. 5 people were severely injured. naijagists.com

Boko Haram has come forward to claim responsibility for this attack that claimed over 185 people in Kano on the 20th of January 2012.

44 people were reported killed in this terrorist attack by Boko Haram. naijagists.com

Over 100 people died in this series of attack on government buildings and drive-by shootings that took place in Damaturu, Yoruba state.

Another bomb blast kills 4 in Maiduguri.

25 people died in this suicide attack at United Nations hdqts in Abuja in November of last year. Over 100 foreigners and locals were injured.

A bomb-packed car detonates at the Police hdqtrs in Abuja. 2 People were reported killed while others injured

Nigeria has developed to a terrorist state. This country needs aggressive intervention from the international communities.

May God protect us from these evil beasts