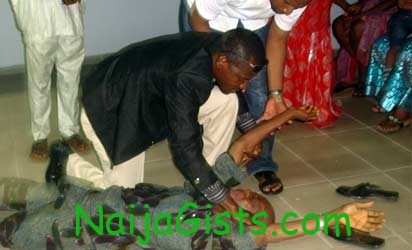 June 4, 2012 – Relations and friends, sympathizers who besieged the conference room of the Murtala Muhammed Airport, MM2, local wing broke down in tears and wept uncontrollably yesterday as they listened to the names of their loved ones being announced among the people onboard the ill-fated Dana airplane. naijagists.com

According to a report from Vanguardngr, it took the intervention of the armed security personnel to control the crowd who were already threatening to beat up officials of Dana Airline for delaying the release of the manifest.

When we spoke with Professor Peter Okebukola, immediate past Executive Secretary, National Universities Commission, NUC, at the airport, who was scheduled to travel on the same crashed aircraft to Abuja confirmed that NUC lost four staff to the crash.

Okebukola, who was visibly shaken by the development, described the crash as a national disaster.

According to him, “the plane that crashed was supposed to take me to Abuja before we heard the sad news. I am deeply sad. This is a national disaster. As I speak to you now I can confirm to you that NUC lost four staff in the plane crash. The names are Mr Mamud Dokawa, Architect Chinwe Obi, Mrs Shuaibu and professor Nwoleri,  past Vice Chancellor university of Technology, FUTO, Owerri and the leader of the NUC team.

Okebukola said he had to go back home as further flight had been suspended by management of Dana Airline.

History of the ill-fated Dana aircraft

LAGOS — There are indications that the Dana Air MC Donnell Douglas MD 83 which crashed around Iju-Ishaga area of Lagos ,yesterday has a history of worrying defaults even before original owners, US-based Alaska Airlines sold it to Dana Airlines on February 17, 2009.

According to the information from Aviation Safety Network, an exclusive service of the Air safety Foundation, the ill-fated aircraft was acquired by Alaska Airline in November 13, 1990  with registration number N944AS.

However, on November 4, 2002 the aircraft developed fault and had emergency diversion due to smoke and electrical smell in the cabin area, which engineers said was because light ballast had over heated.

Four years after, the aircraft’s health was also called to question when on August 20, 2006, it was again evacuated after landing at the Long Beach, CA due to a chaffed wire bundle that discharged and produced smoke in the cabin area again.

Apparently scared that the worst could happen, Alaska Airlines was said to have on August 21 parked the aircraft at Victorville until September 11 2008 when it carried out maintenance on it.

Eventually on February 2009 Alaska Airlines shifted the burden to Nigeria when it sold the ill-fated plane as 5N-RAM. The MD-83 was manufactured in 1983, announced go-ahead on January 31, 1983 and had first flight on December 17, 1984

It was a longer range development of the basic MD-81/82 with higher weights, more powerful engines, increased fuel capacity and longer range.  It was equipped with slightly more powerful 21,000 1bf (93 kN) Pratt and Whitney JT8D-219s as standard.

This is however not the first time an air mishap has claimed a large number of people. In fact tracing the history of air mishaps in Nigeria, shows that:

Past Plane Crashes In Nigeria

A Dana Air McDonnell Douglas MD-83 with registration number 5N- RAM that finally crashed, yesterday, killing about 153 passengers on board, was a disaster waiting to happen.

On May 3, an unnamed Lagos station manager of the airline was reported to have drawn the attention of management of the airlines that the aircraft in question needed to be grounded for general check-up but that alarm was ignored.

So on May 11, 2012, the same aircraft that was billed for Lagos/Abuja with more than half capacity passengers and an air return and had emergency landing at the Murtala Muhammed airport.  Reports said passengers on board  had to hurriedly disembark and sought alternative means of travelling.  No casualty.

On May 25, 2012, the same plane that was to do  Lagos/Calabar flight also made another air return to Lagos after the crew reported engine fault. There was also no casualty.

Then came the final straw.  On June 3, 2012, the same MD-83 with registration number 5N-RAM was performing a flight 9J-1993 from Lagos to Abuja with 153 passengers on board when the crew also discovered that the engine had developed fault.  The pilot made a quick air return to Lagos.

But while on a final appraisal to the runway 16L,  the aircraft rammed into a power line, crashed into a build-up area about 5-6nm from touch down and burst into flames, killing all passengers on board.