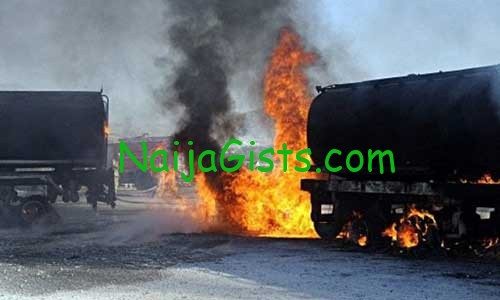 Over 90 people were reported killed in a very sad fuel tanker explosion accident that happened in Rivers States this morning.

We learnt a fuel tanker which exploded at Okobe, Ahoada West LGA of Rivers States claimed over 90 people.

The explosion was triggered when crowds gathered around a linking tank to scoop fuel.

Okada riders and folks who rushed to the scene to scoop free fuel were killed by the tragic explosion.

People need to keep in mind that nothing in this world is free.

Nothing goes for nothing as they say.

The quest for free fuel is what killed most of the people who died today.