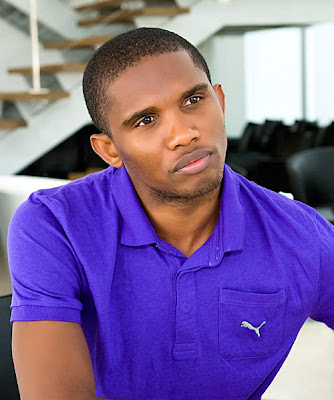 Chelsea are to sign Samuel Eto’o on a stunning £7million one-year deal on Thursday after admitting defeat in their pursuit of Manchester United striker Wayne Rooney.

According to Daily Mail, Eto’o, the 32-year-old Cameroon forward, is taking a huge pay cut from the £17m a year that made him the world’s best paid footballer at Anzhi Makhachkala and will sign on a free transfer.

However, Anzhi are understood to have sweetened the deal by giving Eto’o a multi-million-pound lump sum to get him off their wage bill.

Eto’o arrived at London’s St Pancras station on Wednesday night, where he was pictured with super-agent Pini Zahavi, and is due to have a medical at Chelsea’s Cobham training ground before finalising terms after his advisers held talks on Wednesday.

Chelsea coach Jose Mourinho, a confirmed Eto’o admirer, turned to his Plan B after United steadfastly refused to sell Rooney.

There is a kinship between the Chelsea coach and his new signing.

Eto’o has never been short of an opinion. At Barcelona he took a microphone on live television and called his former club Real Madrid to celebrate Barcelona’s 2005 Spanish title; he dared to publicly attack Ronaldinho’s work-rate and justifiably threatened to leave the field when racially abused from the stands in Zaragoza.

It is no surprise that his first exchange with Mourinho was a heated one.

In the tunnel at Stamford Bridge in 2005 when Chelsea beat Barcelona in the Champions League, a melee followed between players, and Eto’o was vocal in his opinion of Chelsea’s tactics. Mourinho liked the striker’s feistiness. “I liked the fact he was worked up after a defeat,” recalled Mourinho.

That fire was put to good use when the two joined forces at Inter Milan where Eto’o was the spearhead for Mourinho’s Treble-winning side. During that time, the four-time African Player of the Year scored a winner at Stamford Bridge to end Chelsea’s Champions League hopes.

Silky of touch, dedicated and clinical, Eto’o is also one to nurture the young players around him, a factor that will not be lost on his coach.

Questions will be asked whether he has the pace which made him such a feared opponent in Italy and Spain and there was evidence in Russia and the Europa League last year that his power is dwindling with age.

However, his speed of thought and relationship with Chelsea’s other Anzhi recruit, the Brazilian Willian, still spawned a goal ratio of one every two games. It is a gamble Mourinho is prepared to take and one appreciated by Eto’o.