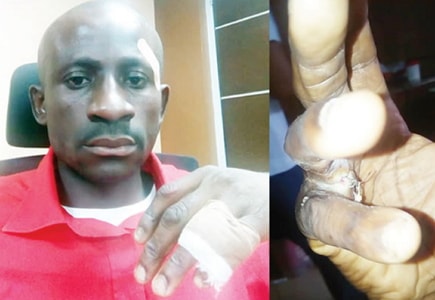 SARS Torture Cell Is A Graphic Picture Of Hell; I Saw Over 70 People Inside A Room – Taxify Driver John Otuechere

Mr John Otuechere, has accused operatives of the Special Anti-Robbery Squad of the Lagos State Police Command of wrongful arrest and torture.

The Taxify driver, who demanded justice for the violation of his rights, added that he was arrested, detained and tortured for allegedly stealing the bag of one Mrs Alice Isah.

According to Metor Plus, Isah who came back into the country from training in Dubai on Sunday, July 15, had called the Taxify driver to pick her up from the Murtala Muhammed International Airport and drop her off at her residence on Lekki Gardens Estate, Lagos State.

Otuechere said while they were on the way, his car developed a fault which prompted him to park to examine the vehicle.

He said, “We were on the Third Mainland Bridge when my car started making an unusual sound. I did not stop because it was dangerous; so I managed it until we left the bridge.

“I eventually parked beside a RRS Patrol vehicle to examine the car. While examining the car, a guy crossed over from the other side of the road to assist me. I don’t know him, but he said he was a mechanic, and we discovered that only one nut was left holding the tyre to the bolts on the driver side.

“The woman (Isah) at this point got down from the car to observe what was going on. She saw that we had to unscrew one nut from the other tyres to fasten the tyre on the driver side to the vehichle. I gave the man N100 and he crossed back to the other side of the road before we moved on.”

The 37-year-old driver said they had no other stopover till they got to Isah’s residence where they brought down her luggage. He said the passenger, at this point, discovered that one of her bags had gone missing.

Otuechere said he suggested taking her back to the airport to check whether she forgot the bag, adding that instead, Isah accused him of conniving with the mechanic to steal her bag.

He said, “I told her that I would take her to the airport and back for free, but she insisted that she personally put the bag in the boot of my car.

“She held me and started slapping me, calling me a thief. One of her neighbours and the estate’s chief security officer accompanied her, and I was taken to the Ogombo Police Station.

“The second day, when the policeman who investigated the case suggested that we searched for the bag at my house and the airport, she said he was supporting me and she petitioned the state police command and the case was transferred to Ikeja.

“Immediately I got to SARS in Ikeja, a policeman, identified as Omoleme, hit me many times with an iron bar to make me confess in the presence of the woman. He said he would kill me and nothing would happen. I was in tears because of the pain; my blood was all over the floor and I was told to pull off my dress and start cleaning it.

“I was taken to the man in charge of SARS; when I tried to explain to him that I was innocent, he ordered his men to hang me because I was not saying the truth.

“SARS cell is a graphic picture of hell; I saw over 70 people inside one room and immediately I entered, I was welcomed with several blows, slaps and kicks.”

The Abia State indigene said it took the intervention of his lawyer before the SARS operatives agreed to search for the bag at the airport.

He added that the bag was eventually found and recovered at the airport where the woman forgot it.

Otuechere, whose two fingers had been broken during the torture, said he wanted justice and compensation for being humiliated and tortured for a crime he did not commit.

He said, “When my lawyer saw my condition, she was annoyed with the officers for torturing me without investigation. She insisted that they should search for the bag at the airport; so a policeman went with my sister. I was told that the bag was found at the airport.

“When they returned, I was released. The woman has not called to apologise; even the officers of SARS did not apologise for torturing me without investigation. I want justice, I demand a written apology from F-SARS and Mrs Alice Isah for wrongful accusation, detention and torture.

“I also demand N10m compensation for my inability to provide for my family because of the torture.

Otuechere’s sister, Chika, said Isah was not remorseful of what she did to her brother after they recovered the bag at the airport.

Chika said, “When we got to the airport, we went to where they normally put missing luggage. We didn’t even stress ourselves before we found the bag there. The airport officers told us that they picked it on the floor of the airport.

“The woman was not remorseful about what she caused. The SARS officers were even harassing me despite knowing that she was the one who forgot the bag.

“They broke my brother’s fingers because of this issue. I want the government to fight for us. They should end SARS, they are killers.

Isah, however, said she never took the law into her own hand, adding that she involved the police because she needed them to recover her bag which contained vital document.

Isah said, “The car started jerking on Third Mainland Bridge and he stopped to examine what happened and discovered it was the tyre. I had to tell him to manage it till we left the bridge.

“After disembarking the bridge, one strange guy came and I saw them looking at the tyre. The driver told me that it was some missing nuts that caused the problem.

“When we got to my residence, we could not locate the bag. Because of those two stopovers and the strange fellow, I thought that that was how my back got missing.”

Isah said she reported the case at the Ogombo Police Station, where Otuechere was detained, adding that she reported to SARS because she urgently needed her bag.

“I was the one that went to the SARS to report. When they heard from me and John, they decided that we should go to the airport where the bag was found. I don’t know how to explain how I felt when I saw the bag at the airport. I did not torture him; I only reported the matter to the law enforcement agents because I wanted my bag.

“When we were leaving, they said we should bring our lawyers, so I went there with my lawyer and they exchanged addresses and phone numbers. I have been waiting to hear from my lawyer since then.”

He said, “What happened was that a case of stealing was lodged against him at Ogombo division. Before investigation into the case could start, the complainant in the case moved it to another level of police investigation, which is SARS.

“Through diligent investigation by the F-SARS team, the missing bag was recovered. The Taxify driver was subsequently released on administrative bail. I must tell you on good authority that throughout the period of the investigation, he was not tortured by the F-SARS men.

“However, it must be noted that the suspect was roughened up a bit by a mob. For him now to turn around to put any form of blame on the F-SARS men who worked hard to recover the stolen bag is most unfortunate.

“Meanwhile, investigation into the case is still ongoing and efforts are on to identify and arrest the mob that attacked him before he was handed over to the police.”

Fulani Herdsmen Kidnap, Kill Nigerian Man Who Returned From Sweden After 30 Years To Start Farming Business In Edo State
Peacemaker Stabbed To Death By Friend In Agege Lagos During Fight Over Money